Hi Jenny @Minnie15 - Great to hear from you!

Firstly, yes we have had some rubbish weather over recent days and it sounds as though you we escaped a little better than you did! We were almost snowed in on Sunday and Monday, but it wasn't a massive issue and it has all disappeared now. No I didn't build a snowman, I stayed in and watched my team, Arsenal. That turned out to be a massive error of judgement, I can tell you. They were shocking ...

You sound as though you are doing brilliantly, so well done! Isn't it an amazing feeling picking things up off the floor, tying shoelaces and generally just forgetting you had dodgy hips. Still doing lots of walking, which I have grown to love and Jacqui (wife) often comes with me. If she doesn't, I just listen to podcasts and keep going. I even tried again to do some tentative running - just because I can, but I am not going to go mad. I used to do lots of half marathons and my elder son is fast approaching my best time - which is a big concern!

I am not sure whether I told you, but I work for myself and over the last few months, I have been very tempted to retire. I have had a great time, but one of my friends, who is a director of a local authority in London, has persuaded me to back for six months. I am starting in January, four days pw, two at home and two in London. We shall see.

Yes, loads of gigs, but starting to tail off now. Then a month off! The band will have to go into abeyance for now, although I have been offered a gig in April and I may well have a bash

Have great Christmas and New Year and please keep in touch

)
At 50, you're still a pup to many of us. Sounds like you're doing well...back living life.
You have a lot to celebrate this birthday.
Hope you're doing something special tomorrow

Wishing you a wonderful birthday and great 2018! 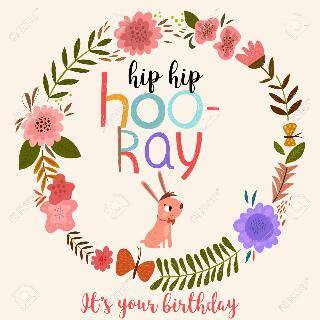 Little late but hope it was happy.

Happy Birthday @Minnie15 ! I loved reading your post and hearing how well you are doing. That is fantastic! By now you are in Washington and enjoying the city I’m sure. What a wonderful experience for your son as well to see all there is in DC plus maybe he will see a little snow. I agree with all that you said about not having any more pain and being able to do things once again that we hadn’t been able to do for a while. I also agree about needing LOTS and LOTS of patience. My OS told me that it will just keep getting better and I can see now what he meant. I, too, sometimes forget about the surgery and I feel truly blessed to have been able to have the new hip successfully. When I think of it most is after I park my car at a store and I’m making that walk from the car across the parking lot to the store. I think I always feel thankful I can now do that pain free.

Enjoy your vacation. I wish you and your family a very, very Merry Christmas :tree lights: And a wonderful 2018!!!
OP
OP

@GrannyC
Had the most amazing time in DC! So wonderful to see all the family I lived with 31 years ago! It was a truly memorable way to celebrate my birthday. My son absolutely loved it all too! Yes we had a little snow but it actually warmed up towards the second part of the week.

There’s a lot of walking to visit the beautiful places in Washington, so my hip was a little achy at times! Having said that it recovered quickly each time and the red wine was a good pain relief!! No problem with the flight, I kept moving my legs to keep the circulation going.

I’m so glad you’re pain free. What a year it has been hey! Onwards and upwards as we Brits say!

Enjoy Christmas with your family and here’s to a happy, healthy, and arthritic pain free 2018!

To all my BS friends that have helped me through the decision making and the tough year, I can not thank you enough.

@Minnie15 I'm so glad your trip went so well and that your son enjoyed it, too. There is certainly no shortage of things to see and do in Washington, that's for sure. You have been through a lot this past year but you made it with flying colors! Well done and your comment about onwards and upwards is perfect! Here is to a happy, healthy, OA free 2018

. Merry Christmas to you and your son!! :merry christmas:

Hope you are doing well....
See you peeking about.
All the best to you!

Mojo333 said:
Hope you are doing well....
See you peeking about.
All the best to you!

Thank you @Mojo333
I’m trying to use the bonesmart app! Just posted an update, no idea where it’s gone?!
How you doing?
OP
OP

How are you @GrannyC ?
How’s that hip doing now? We’re clocking up a year next month can you believe it!
I’m feeling great both physically and mentally. Still taking each day as it comes but definitely in a better place all round at the moment.
We actually had snow last weekend! It was fab and my son enjoyed the sledging. Very unusual here, we have to make the most of it!

Haven't got the hang of the app either.
Keep going back to the browser ...
Old dog , I guess.
Doing really well. Have figured out still possible to stress these legs...thought all was great until I push things with unintended over activity and heavy lifting.
I'd say I'm 95% good, and THAT is great.
Hope all is the same with you...can't find your update either!

The browser is great! I shall stay here.

Did you find it? I can’t see it, it was a few lines saying that I’m coming up to a year etc. Bizarre!

Anyway, really glad to hear you too are doing well. Yes I agree that sometimes you have to watch yourself especially with lifting heavy things. I also find that certain movements like stretches makes it feel a bit clunky inside (can’t think how to describe it) it doesn’t hurt when this happens just slightly odd!
OP
OP

Time flies and the more it does the more I forget I even had a THR! One year, one month and counting. Life is sweet.
If anyone wanted any reassurance to make up their mind, if you should or shouldn’t go for the op, then please ask! I really couldn’t have done without the support from the amazing people that log on to here. You drift apart, there’s little time to post updates and normal life kicks in but comments and help and support will always stay with me right from the first day.
Thank you everyone!

@GrannyC how you doing? Sending best wishes x
@sammylou99 how’s Hampshire life? I remember reading your update saying at about 12 weeks you were climbing those stairs with ease, almost running and I thought wow you’re totally amazing! I hope all is well.

What a beautiful update, Minnie.
Thanks for taking the time to share and the offer to reassure anyone struggling to schedule surgery.
It's very kind and generous of you. I hope have a beautiful Summer!
@Minnie15

@Minnie15 what a fantastic post! You said it all so well. It’s hard to believe it has been well over a year now since we started on this journey but you are right that BS helped us both through it with all the support and helpful information. I, too, am doing well, and often forget I even have a new hip. Enjoy your summer!
OP
OP

So good to hear @GrannyC and I hope you have a lovely summer too. It’s getting warm in Bristol (hip loves the warmth!) which is fab and unusual for us Brits!
Lots of best wishes from across the Atlantic

I can hardly believe it has been 2 yrs already since we went down this road. I hope this finds you doing well and enjoying life again!! I’m doing fine and enjoying being pain free. I don’t get in the forum as much as I used to but try to stop by now and then to add my two cents to an occasional post. Take care and here’s to another good year

Happy Two Year Anniversary, Minnie!
I hope all is well with you.
Leave us an update next time you stop by. We'd love to hear how you're doing.
Cheers to the future!
@Minnie15
You must log in or register to reply here.