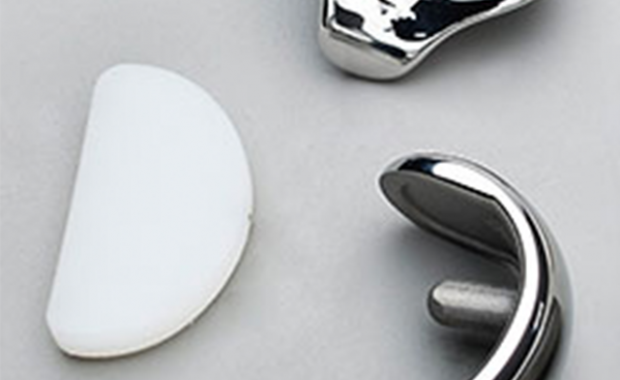 Partial knee replacement (PKR) or resurfacing is necessitated when the arthritic damage to the joint is confined to one, two, or even three compartments of your knee: (1) Medial: the inner side of the joint next to the other leg; (2) Lateral: the outer side of the joint and (3) Patellofemoral: the area between the knee cap and the upper front surface of the femur (thigh bone). There are prosthetic implants designed to replace each arthritic compartment. 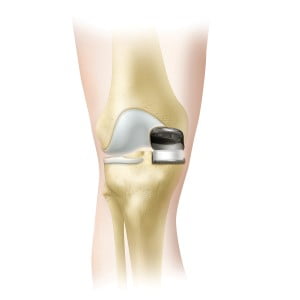 A unicompartmental knee system retains the healthy compartments of your knee joint and only replaces the damaged surfaces of one compartment. The implants can either be stock items in a range of sizes or custom made from MRI and computer generated scans.

There are three areas within the knee served by partial replacements 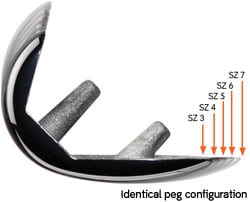 Both medial and lateral types of partial knee replacement have plastic devices inserted onto the tibial component which serve as a spacer and provide smooth articulation or bearing between the two metal devices. The plastic is designed to replace the semi-lunar cartilages in the knee that act as shock absorbers and aid the activity of the knee joint which is why they have a tendency to get damaged during intense sports activities such as football, rugby and ice hockey.

There are two types of medial and lateral partial knee replacements:

As osteoarthritis progresses, and the patient is no longer a candidate for a unicompartmental implant, a total knee replacement has traditionally been the only treatment option available. Now, surgeons have the ability to remove two (bicompartmental) or even three (tricompartmental) components of your knee joint and replace them with partial knee implants.

A bicompartmental implant does not span the entire width of the knee. The non-arthritic areas of the knee and the anterior and posterior cruciate ligaments (ACL and PCL) are preserved in this procedure (as opposed to in a total knee replacement). The removal of less bone and the preservation of the ligaments generally results in a shorter recovery time.

Many maintain that the bicompartmental implant feels and functions more like a natural, well knee than a total replacement. The implant is often used in younger or active patients.

Each patient’s anatomy is different and each surgical intervention must be customized to the particular patient’s needs as well as the specific surgeon’s expertise and familiarity with implants from the various manufacturers.

With advancements in medical imaging technology, a patient’s CT scan can be used to develop a 3D model of that patient’s knee. The information obtained in the patient’s digital model allows for a personalized implant to be developed that is unique to that patient.

Partial replacements can be performed though much smaller incisions (often incorrectly referred to as MIS: ‘minimally invasive surgery’) and can employ different kinds of instrumentation such as computer-assisted navigation (NAV).

Most partial knee implants are metal-on-plastic. This means that a metal implant caps the femur and the tibia. Between those metal implants, your surgeon places a plastic insert or spacer which may be fixed or mobile. The most common method of fixation of both implants to the bone is with bone cement. Fixed spacers are press-fitted into the tibial tray and the femoral component glides across the surface.

In joints with mobile bearings, the plastic spacer isn’t fixed but allowed to move back and forth with the action of the joint. Many believe that this allows greater freedom of movement in the joint and also reduces the amount of wear that could take place. However, traditional PKRs retain good movement even in joints with fixed bearings and demonstrate a limited history of wear.

Where there is a small area of damage in the knee, it may be possible to resurface just that point with plastic implants but the data on outcomes is limited.

Patients with arthritic changes in more than one compartment are not generally considered candidates for partial replacements. In such cases, a total replacement is recommended as there will be considerable erosion and deformity on both sides of the knee joint and behind the patella.

Long term results for partial replacements are still the subject of some debate. Some surgeons are very committed to the procedure and even recommending that if either or both the other compartments develop problems, they too can be resurfaced so the patient ends up with a tri-compartmental resurfacing instead of a total joint replacement. Other surgeons decline to perform partial replacements or have given up doing them because of their experience of a high rate of conversion to total replacement. There is, though, sufficient evidence of long-lasting partial replacements to make PKR a viable option for many patients.