About the Knee Joint 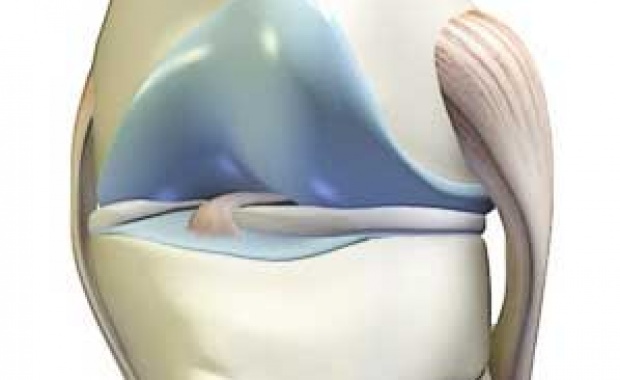 To fully understand your knee degeneration, the knee replacement procedure and the mechanics of your knee implant, you will first need to know a bit about the knee joint itself and how it functions.

While damage or wear to any portion of the knee – bones, muscles, cartilage or ligaments – can negatively affect motion and weight-bearing capabilities, a knee replacement concerns only damage to the bony components of the knee- the femur, the tibia and the patella. 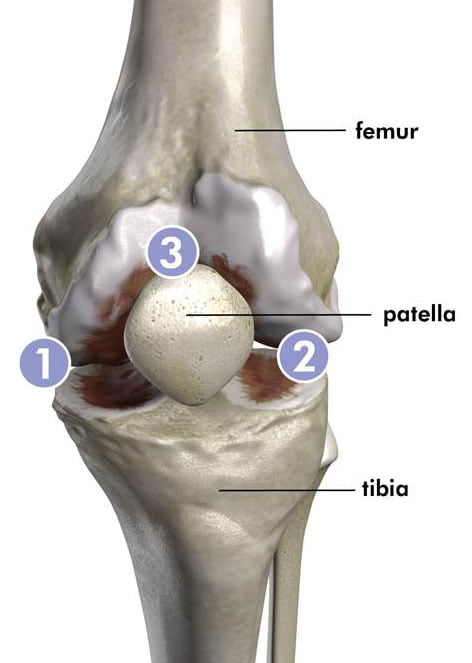 Compartments of the Knee (image courtesy of: ConforMIS)

The knee joint is at the juncture of the femur (your thighbone) and the tibia (the lower leg or shin bone). The femur is attached to the tibia by ligaments.The patella (your kneecap) is at the front of the knee joint. The joint consists of three “compartments” or sections:

Osteoarthritis can affect one, two or all three compartments.

Your orthopedic surgeon may refer to the knee’s three functional compartments: (1) the medial, or inner, (2) the lateral, or outer, femoro-tibial articulations where the femur meets with the tibia, and (3) the patellofemoral articulation consists of the patella and the patellar groove on the front of the femur through which it slides.

The knee joint is surrounded by a joint capsule containing synovial fluid which lubricates the joint. Ligaments strap the inside and outside of the joint (collateral ligaments) and also cross within the joint (cruciate ligaments). These ligaments provide stability and strength to the knee joint.

The knee joint also includes the meniscii or meniscal cartilages. These C-shaped pieces of tissue which fit between the tibia and the femur help to protect the joint and allow the bones to slide freely on each other. There is also a bursa, or fluid sac, around the knee joint that helps the muscles and tendons slide freely as the knee flexes and extends.

Problems occur when any of these parts of the knee joint are damaged or irritated. 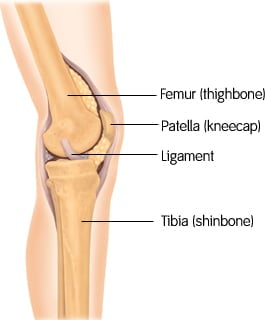 Anatomy of the knee (image courtesy of: Smith & Nephew)

The portions of the femur which help create the knee joint are its lateral and medial condyles – the round portion at the end of the bone. The shape of these condyles permits the sliding and rolling and turning motions in the flexing knee. The tibia also has a pair of flattened condyles at the top where the bone articulates (or joins) the femur.

The patella is part of the tendon that rises out of the quadriceps or thigh muscle. Whilst mostly buried with it the tendon, the back side or posterior of the patella articulates with the patella groove in the femur.

The capsule surrounds the knee joint. It has a tough, fibrous outer membrane and an inner synovial membrane, which produces joint fluid (synovial fluid). This fluid lubricates the joint and nourishes the articular cartilage that coats the ends of the bones in the joint.

Numerous bursae or small fluid sacs are like folds in the capsule around the knee joint which provide extra flexibilty and stretch to the capsule.

Cartilage is a thin, elastic connective tissue protects the bone by absorbing shock. Cartilage also ensures that joint surfaces slide easily over each other for smooth knee movement.

All bones that make up the knee joint have articular or hyaline cartilage covering the end of each bony surface.

Damage to the articular cartilage is usually gradual ‘wear and tear’ damage caused by overuse, aging, and can be accelerated by poor knee tracking. 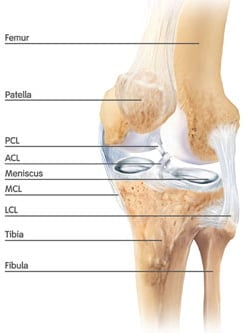 Meniscal cartilage is fibrous with a good tensile strength, separating the bones of the knee and acting as a shock absorber. The meniscus can often be torn in forceful, twisting injuries.

There are two c-shaped menisci in the knee – the medial meniscus and the lateral meniscus.

The ACL locks the knee when the leg is straight and the PCL prevents the femur from shunting forwards on the tibia when the knee is flexed or bent.

How They All Work Together