Mutti3 said:
Just as a suggestion. I also used ice pack under my knee, as well as one of those machine that circulated cold water. Another suggestion by the looks of the picture you posted, that operative knee should be a bit more elevated. During my initial weeks, I used three-four stacked pillows. There is a picture of it on bonesmart. Maybe an advisor can post it for you!
Click to expand...

Thanks I put it higher
OP
OP 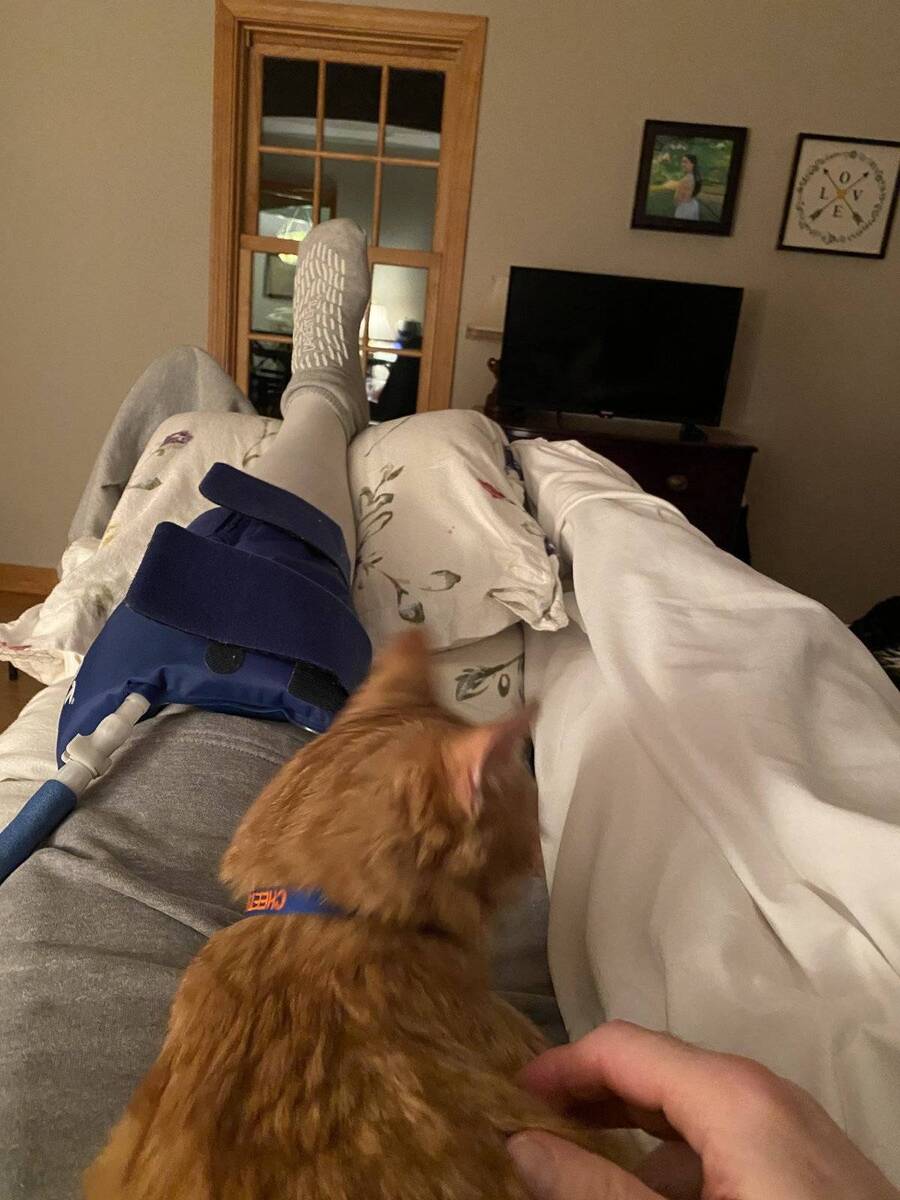 Awww, cats just love to be near us!
L

I have several pictures just like this except mine is my dog. Great recovery pals

I am a cat rescuer and when I had my TKR I had 13 cats that I was taking care of at that time. They kept me busy and were my loving companions. My kitties gave me all the PT I needed!

I have my house plants...

... watering and tending to them is a joy!

One is whining to be re-potted but that ain't happening until the spring.

Nicely done, a fine and handsome cat. This one is 7 months old and was a feral kitten that my son’s girlfriend gave him. (Note: girlfriends who gift feral animals tend toward crazy...) Now Cheeto lives with us, of course. We have two other old cats and various adoptee dogs that have been likewise dropped off here, and needed a feral kitten like a hole in the head. But of course, I am now quite attached to the little monster and have largely socialized him despite many scratches on hands and arms. He knew I was not ok when I got home from the hospital and has been very devoted. He licks my nose a lot because clean noses are a key aspect of recovery. He tried to remove the bandage before I explained that to him. Key part of my medical team.

Ah, makes me want me to resume my pet ownership days... then I recall the LITTER box duty!

Glad your kitty is so devoted...

Animals can be a big help in our recovery. Having something that depends on us for their care motivates us to get up and move. Litter box duty is the pits, but has to be done. Another reason to get up and move. I bought a long-handled scooper from Amazon to aid in my litter box cleaning. There's always a way, with pre-planning, that we can take care of our furry friends during this recovery.
OP
OP

I have a curiosity I can’t really find an answer to online. I had a Stryker total knee put in last week but I did not ask a lot of questions about it in advance, just figured the doctor would use his expertise and that is good enough for me. The PT showed me a model of it yesterday. The thing I don’t really understand is how it will maintain stability?

With a healthy knee you have acl and pcl for rotational stability, and when I tore my acl’s I had the pivot/shift problem where the knee would “go out” or sometimes actually dislocate.

With the Stryker and devices like it there does not appear to be a connection between the femur component and the tibia component. One rests on the other. And they the acl is now gone. I believe the pcl is gone too. So what keeps the knee “together” is muscle, tendon, the two collateral ligaments, and that’s it, I think. I asked the PT yesterday if it is possible to throw this knee out or dislocate and she said very unlikely.

it’s not a huge deal, and I can ask dr in a couple weeks, but living with torn and badly repaired ACLs for 38 years I became very sensitive to this, always careful how and where I stepped to to avoid my unstable knees shifting out. Even now my non surgical knee still has a torn acl and bad arthritis/bone spurs and if I step wrong it moves and hurts. I am hopeful that with new knees his will cease to be a problem but I am curious what holds it all together?

I’ll ask @Jamie to answer your question about your implant and stability.

There are two types of knee implants - one for cases where the cruciate ligaments are healthy (cruciate sparing) and another for instances where they are not (cruciate sacrificing). The latter has a "peg" that stabilizes the implant and enables your knee to work properly. See post #3 in this article on knee replacement in our BoneSmart Library and you'll have pictures to show you how this works. Let us know if you have any additional questions. Now you'll be able to impress your surgeon with your knowledge of how your new knee works!

Thank you very much!
OP
OP

My update on day 6 after TKR surgery is I think things are OK and on track at this point. I am not sure if this information is useful to people in terms of what to expect but here is where things stand with me.

Drugs: Until yesterday I was alternating 50mg Tramadol and 5mg Oxy every 3 hrs. This kept the pain mostly in check but I did not feel the Tramadol was helping much and was making me zonked, with a headache and my stomach was off. So yesterday I went to 4 Oxy during the day every 4 hrs and 2 Tramadol over night. Day was OK, night was harder. I pretty much ached most of the night. It wasn’t acute pain though and I slept off and on as I usually do. But I think this is OK and I can deal with it, aching knees at night are not new to me. The Oxy helps a lot but I only have another weeks worth of it at the rate of 4 x 5mg per day and I don’t want to be on Oxy around the clock. So tonight 1 Tramadol and see how it goes. I really think Aleve would work about as well as Tramadol but they don’t want me to take that for like another week. I also take 2 Tylenol 2x per day as instructed and can’t tell if that helps but it doesn’t hurt I guess.

PT: went fine yesterday. I like going in for it because they have all the equipment there and the Dr office is right upstairs just in case. But going back and forth made me unaccountably tired. I was toward the end of a four hour Oxy when I went in and the PT was fine but I was aching and super tired on the way home and took a pill and passed out. Then I was fine. The PT didn’t push me too hard; the leg lifts hurt but the rest was no big deal. It was good to experience that I could do these things and be told the swelling is normal, the extension is 100% and the ROM looks good enough, though she didn’t give me a number. She said I have no bruising which is true but I hadn’t realized that was something to watch for. Was encouraging but I was wiped out after.

The Knee: I think it is fine. It feels clunky. It clunks a bit moving or swinging laterally. The PT said that is normal and most of her patients have that and then it goes away, comes back, and goes away for good. She said it is due to the swelling and eventually strengthening to tighten things up. We will see. I elevate and ice a lot. Love the cryo cuff, highly recommend.

The Socks: I hate the socks.

Home: my wife is a trooper but I feel bad. She has to do all her stuff plus all my stuff. And she has a cold and it snowed. I would typically do half the cooking, most of the pet stuff, going to the dump, I clean the house etc. She is going all day now and I am doing Oxy and lying here. She is a keeper. The dogs, who used to love love love me, completely ignore me now. They do not like the walker. I am not the one working the can opener, taking them out, and driving to the dump with them in the car anymore. So I am apparently of no use to to dogs. Well guess what? I am going to make a comeback. I will be the head of this pack again and payback is a you-know-what. The cats have remained loyal, unlike the fair weather dogs.

Food: I am starting to want to eat. The Oxy kills the appetite and makes me a little bit spinny. I took off 15 lbs in the 6 weeks prior to the surgery to lighten the recovery load and went at optimal weight but suspect I have lost another 5lbs or so and need to make sure I don’t dump a bunch of muscle lying here before the rehab starts in earnest. So now I am trying to get on an eating schedule of things that are easy to cook. On Oxy, remember to eat.

So that’s day 6 for what it’s worth. Feedback appreciated.

Those darn dogs! So self serving . . . Not! But I guess they are a little simple minded about which side of their bread the butter’s on.

I found the Oxy was helpful at first, but, before the first week was over, it didn’t help enough to put up with side effects. I hope you find a good balance as the time passes.
OP
OP

What did you do after the first week?

Had my first PT today, but it was not as good as yours. I got the talk about the scar tissue forming, was I doing my strengthening exercises, was I working on my ROM, etc. I was not cooperative. I told him my priority was for him to not hurt me. He was checking the ROM and wanted to push a little farther. I asked what that indicated, if he was pushing me. He said he could tell I could go farther, but I didn't go farther. I think you are doing great, and have a good attitude. Keep it up!
OP
OP

That is discouraging. You are smart to speak up for yourself.

Your postings are a riot! Cracked me up about what you wrote about the doggies
It is difficult having folks do everything for us at first. I was so relieved when I could go to the bathroom unassisted.
You must log in or register to reply here.