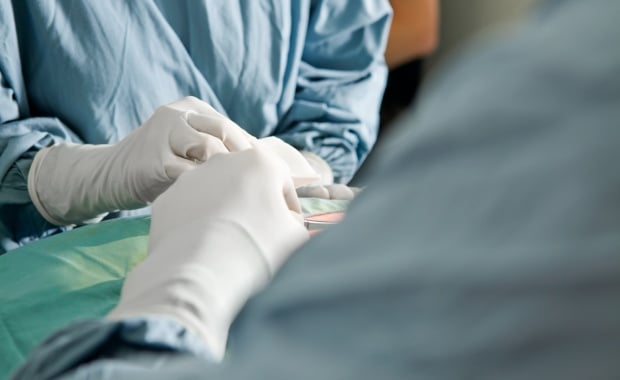 There are a variety of materials used to create the prosthetic components of an artificial hip. But there is also more than one way to go about performing a hip replacement surgery – known as different “approaches.”

The different incisions used in a hip replacement surgery are all defined by their relation to the musculature of the hip. The approaches are posterior (Moore or southern), lateral (Hardinge or Liverpool), antero-lateral (Watson-Jones), anterior (Smith-Petersen) and greater trochanter osteotomy.

The posterior (also referred to as a Moore or Southern) approach allows the surgeon to access the hip joint from the back. The piriformis muscle and the short external rotators (tendons) are taken off the femur. All of this gives the surgeon excellent access to the acetabulum and preserves the gluteus medius and gluteus minimus muscles (which are responsible for hip abduction – when the leg moves outward).

In the lateral approach (also known as a Hardinge approach), the hip abductors (gluteus medius and gluteus minimus) are elevated – not cut – to provide access to the joint. The hip joint is then dislocated and the acetabular socket and femur are exposed for preparation and insertion of the prosthesis components.

The anterior (Smith-Peterson) approach accesses the joint from the front. The posterior capsule and muscles are not cut. This approach allows the surgeon to work between the muscles without detaching them from the femur. Many believe that keeping these muscles intact helps prevent post-surgical dislocations.

The surgeon uses a special surgical table specifically designed to position the patient so that the hip joint may be easily accessed from the front as opposed to the side or back. Surgeons will also use a curved femoral replacement because the typical straight femoral components are extremely difficult to insert without injuring the abductor muscles.

The anterolateral (Watson Jones) approach involves the detachment of about one third of the gluteus medius from the bone. It is later re-attached.

The superior approach is relatively new. Neither the anterior nor the posterior capsule is cut in this approach. And the hip is never dislocated.

Many surgeons now perform minimally invasive surgery in hip replacement. By reducing the size of their incisions to as small as 2.5 inches, they hope to reduce soft tissue damage and speed healing. Because of the impaired accuracy which can occur because of lack of visualization of the joint, surgeons performing MIS generally use computer-assisted guidance systems.

This is a unique and innovative method of carrying out the replacement and unlike other MIS approaches, allows full vision for the surgeon throughout the procedure. The Micro-Posterior Tissue Sparing approach aims to get patients back on their feet within days (possibly hours) instead of weeks. Patients who have undergone this procedure are usually able to walk unassisted the day after surgery, and leave the hospital without the typical restrictions (such as crossing their legs) associated with total hip replacement. Patients can also have as little as a 3-inch incision. It is important to understand that “less invasive” does not only refer to the incision but also means less trauma to the muscles and tendons under the skin. Replacement is designed to precisely reconstruct the hip without stretching or traumatizing muscles that are important to hip function.

There are two small incisions made in this approach, one being the main access to the joint and through which nearly all the work is performed. The other is a very small incision in the thigh through which a special instrument is employed to work on the acetabulum (socket). This technique is a unique and innovative method of performing a hip replacement.

Some approaches are more commonly used than others but hip replacement patients should understand that surgeons usually have specific approach(es) with which they are most experienced and comfortable. The surgeon should be able to explain his or her preference to you and help you understand why any particular approach is best for your situation.