About the Hip Joint 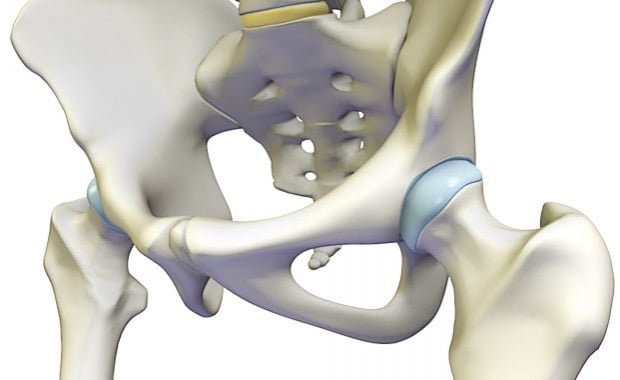 The hip is the body’s second largest weight-bearing joint (after the knee). It is a ball and socket joint at the juncture of the leg and pelvis. The rounded head of the femur (thighbone) forms the ball, which fits into the acetabulum (a cup-shaped socket in the pelvis). Ligaments connect the ball to the socket and usually provide tremendous stability to the joint. The hip joint is normally very sturdy because of the fit between the femoral head and acetabulum as well as strong ligaments and muscles at the joint.

All of the various components of the hip mechanism assist in the mobility of the joint. Damage to any single component can negatively affect range of motion and ability to bear weight on the joint. Orthopedic degeneration or trauma – those conditions affecting the bones in the hip joint – can necessitate total hip replacement, partial hip replacement or hip resurfacing.

Bones of the hip joint

The femur is the upper leg bone or thigh. It is the largest bone in the body. At the top of the femur is a rounded protrusion which articulates with the pelvis. This portion is referred to as the head of the femur, or femoral head.

There are two other protrusions near the top of the femur, known as the greater and lesser trochanters. The muscles involved in hip motion are attached to the joint at these trochanters.

The acetabulum is a concave area in the pelvis, into which the femoral head fits. The pelvis is a girdle of bones, connected at the front by cartilage pad, called the pubis, and at the back by the lowest four fused vertebrae (the sacrum). The sacro-iliac joints are located where the sacrum meets the pelvis.

The bone surfaces of the femoral head and acetabulum have a smooth durable layer of articular cartilage that cushions the ends of the bones and allows for smooth movement. 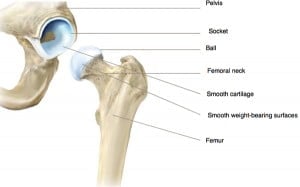 You may hear your hip surgeon refer to the capsule or socket, when describing the structure of the hip joint. The joint capsule is a thick ligamentous structure surrounding the entire joint.

Inside the capsule, the surfaces of the hip joint are covered by a thin tissue called the synovial membrane. This membrane nourishes and lubricates the joint.

The labrum is a circular layer of cartilage which surrounds the outer part of the acetabulum effectively making the socket deeper to provide more stability for the joint. Labrum tears are not an uncommon hip injury.

The various muscles which attach to or cover the hip joint generate the hip’s movement.