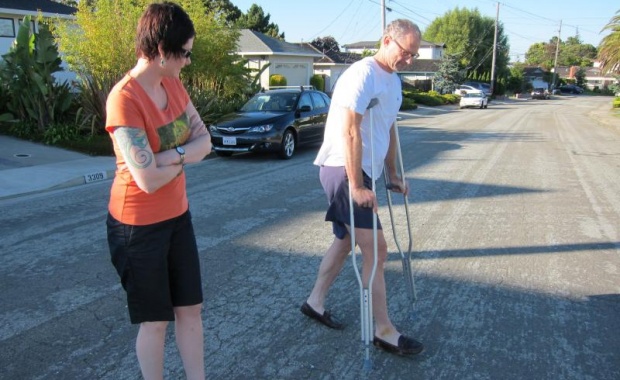 Hip resurfacing is generally considered to be a good option for younger patients as less bone is resected from the upper end of the thigh bone. However, some surgeons will do this procedure on older patients too if they feel it appropriate.

The resurfacing consists of installation of a cap on the upper end of the femur (as opposed to the implantation of a ball-shaped prosthesis to completely replace the femoral head) and a cup for the acetabulum (socket) similar to that used in a total hip replacement.

Advantages of hip resurfacing are that, should it be necessary to convert the hip resurfacing to a total hip replacement in the future, there will have been less bone resection making the implanting of a total hip replacement implant that much easier. Disadvantages include weakening or softening of the bone, leading to collapse or fracture under the stress of weight if there is osteonecrosis or osteoporosis present.

Partial Hip Replacement, by contrast, is a procedure most often used in cases of broken hip (fracture neck of femur) where the fracture cannot be pinned. In these cases, the broken femoral head is replaced with a prosthesis which is just a ball and stem. The acetabulum is not touched as it is still in a good condition. Inevitably, these operations are most often carried out in the elderly.

On occasion, a surgeon might consider it appropriate to carry out this operation on a younger patient who has a limited degree of osteoarthritis but whose acetabulum is still in reasonably good condition.

Partial hip replacement could give the younger patient some time before they have to resort to a total replacement. However, the bony socket does not always do well bearing on a metal prosthesis, which can cause some erosion of the bone resulting in a thinning of the floor of the socket.