sjfischer,
Trailspud has not been around for almost a year.
As I recall he found both knees performed pretty much the same.
Glad you have a great surgeon.
Last edited: Jul 18, 2019
OP
OP

I sent you a PM. I have been gone awhile from here.

All is well. Gym, fast walking, some hiking although not a good year for that. Life has been busy. A few times a year, I let myself run a little. Up to 5 miles slow with max. cushioned shoes. I have a lumbar issue so no more running until maybe next spring and some weight loss.

Thanks for the update, happy to hear you are doing well.
OP
OP

Yesterday I signed up for the 2019 Wasatch 100 to be held in early September. I last did this race 20 years ago as the degeneration in my knees were getting to the point where surgeries were in line. I only got back to some running for some time and decline continued. In 2012-13, I had my TKRs.

As part of the 40th anniversary race, one of the old-timers got a special addition to the race. 40 in 40. Anyone who did the race in its first decade, gets in and is allowed 40 hours to complete. I’m in that. I haven’t gone longer than 20 miles since TKRs, I’m still 30 lbs. overweight, but I’ve got 9+ months to get where I need to be. To hike faster than 2.5mph with over 26,000’ of total gain at altitudes up to over 10,000’, and most importantly for such distance and time will be a huge challenge for me. I still have some old friends in this forum so I’ll try to periodically report on my progress.
Last edited: Dec 22, 2018

Trailspud,
Good to see you here, wishing you a great training season, and completing the 2019 Wasatch 100 in September. Looking forward to your periodic updates.
OP
OP

I’m behind schedule by quite a bit, but after a rough flu and virus season and other work/family stuff, this was a good weekend. 11miles on the flats w/8 lb. pack at 13m/m on Sat. Today (Sunday), I did a 12 mile hike in the hills w/my oldest. About 17m/m so I need to get my weight down, pace up, and distance longer, but I’ve got 5 months left to get in shape for the attempt.
OP
OP

Still behind schedule, but a good summer so far. We went to Spain for a 7 day walk on the Camino first half of June. I got in about 15-20m/day w/side trips.

Yesterday was my first 20+ mile hike in a few years. About 22.5 m w/5,000’ of climb in 6.5 hours. Had to carry about 10 lbs. at start (water). Still need a lot more weight off and need to do a lot more miles and elevation. Knees are fine. A little soft tissue swelling at times, but manageable.

Trailspud,
Great to hear how well you are doing, your trip to Spain sounds wonderful.
Thanks for keeping us posted on your remarkable recovery!
OP
OP

Mid-July update:
Still not making progress getting my weight down as much as I’d like. Got time still.

Great update! Thanks for the photo.

WOW! I admire your drive and success stories. You are amazing.
OP
OP

Pumpkln said:
Great update! Thanks for the photo.
Click to expand...

I should get a selfie stick so my big face doesn’t block the great views . But, it was a text pic. 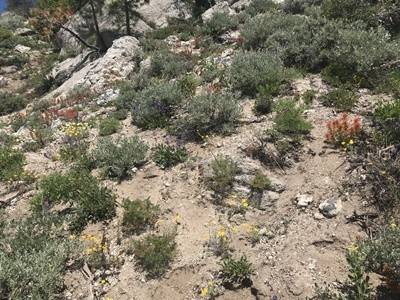 In a couple of weeks the east slope of that mountain will be a sea of lupine. Very beautiful. Some Indian Paintbrush, Lupine, and others from the drier west side.
OP
OP 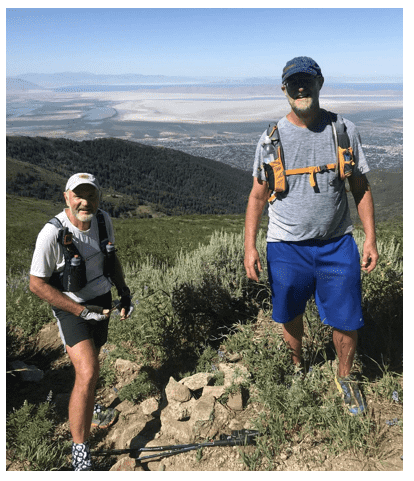 A few days ago I participated in the “class reunion” division of my old, favorite race. 13 hour hike for me with near 11,000’ of climb and just under 33 miles of steep, rocks, mud, storms...very fun. I never got my weight down anywhere close to what I needed and my training was also well off of what I hoped for. Maybe 2020? Still, it was a wonderful time seeing people I had not spent time with for two decades.

Great to see you doing better and better.

For a "not so think guy" you are really doing great!! I love seeing folks who were worried about activity after TKR===Like me---do so well afterward. the best part is so far, no knee pain for 11 years!!!

I'm back hiking, too, but nowhere near the extent that you are. You are doing fantastic with your bionic knees!
OP
OP

A couple weeks ago I saw a knee doc for the 1st time in over 6 years. This time I saw a local doc, the one I would have chosen if I had my TKRs at home, and had X-Rays.

7+ and 6.5+ years out respectively (right, left), the bionic knees look brand new. I do have a slight gap/tilt in my left knee, but nothing to worry about now. If it ever causes wear then swapping out the poly insert is not a big deal. Check up in 12 months.

Good deal! I’m 3 weeks PO and I’ve started my walking/hiking again. I did 1.5 miles today and I think I could have gone further. I’m going to take it slow and safe so I can get back to where I was prior to my surgery. You’re doing great!

Thanks Trailspud, great report. Have a great 2020!
OP
OP

Pumpkln said:
Thanks Trailspud, great report. Have a great 2020!
Click to expand...

Belated thanks, but it is finally 2020. My birthday today — 62 — and it’s raining like crazy in SW Idaho valleys with a lot of wet snow in the mountains so I’m headed to the gym soon. I just entered the 2020 Wasatch 100. I made it 1/3 of the way last September, but I’m focused on a much better showing. Retirement comes in 4.5 months so I’ll have plenty of time to train and lose that extra 30 lbs. I need to shed for a fair shot. The recent doc visit gave me added confidence to train w/o worries. Lots and lots of hiking with a little running and more gym mixed in.
You must log in or register to reply here.