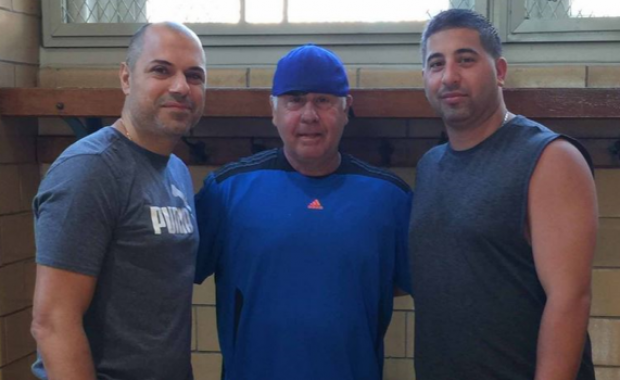 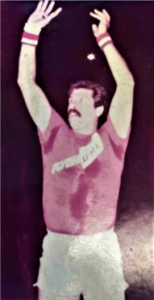 “I am a living, breathing and playing testimonial to the idea that if you find the right surgeons, the right hospitals and add a very high level of determination, you can play basketball competitively after your knees are replaced.”

The court is no place for a guy with bad knees!

For Craig Raucher (username raucher on the BoneSmart forum), playing competitive basketball was always a part of life. But eight years ago at the age of 59, he was definitely in the typical age window for having his knees replaced, especially given his long and rich history with the sport. Now, at the age of 67 and with two knee replacements behind him, he’s back playing full-court basketball three times weekly not only with his contemporaries, but also with friends who are decades younger.
While spending more than 30 successful years in the transportation industry, Craig also pursued his life’s passion – basketball. He’s played organized and college basketball for more than 50 years and is the founder and Commissioner of the Staten Island Basketball League. This well-known organization at Public School 8 in Great Kills, Staten Island began in 1980. It’s the oldest and longest running group at the same location in the history of the New York City school system. Ages of the players range from 40 to 70 and the league is run in a most unique way. The participants are seasoned hoopsters who played in high school or college or in leagues for years. During each three-hour session on Monday and Wednesday nights and Saturday mornings most of the guys play six full-court games. It is a great workout and a highly competitive experience.
During his lifetime, Craig had many knee surgeries due to injuries from basketball and running. Eventually he got to the point where he needed both knees replaced as the pain was unbearable. As Craig puts it, “My quality of life was not good. As an aging athlete, basketball and working out defined my nature and were my shield against growing old. And now I was basically sidelined from both!” 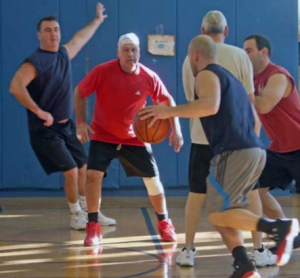 The quest begins for a solution

In his search for help with his knee pain, Craig sought out surgeons in the New York City area. During those initial consultations, he was told straight out that he would never play competitive full-court basketball again. When he asked why not, the doctors replied they never had a patient with one – let alone TWO – total knee replacements come back and play full-contact, full-court basketball at the intensity Craig was used to. So even before he started on his knee journey, Craig was told he could not do something that he loved. He silently vowed to write a completely different ending for his recovery. “I listened to what they had to say, but I was determined to get back to playing my sport at a high level regardless of what I was told.” This determination led Craig on a recovery journey that, although not appropriate for everyone, worked very well to get him back in the game. His goal was to defy the odds.
Craig’s approach to knee replacement surgery and recovery involved extensive research and some hard work physically to get himself in shape for what was to come. Prior to both surgeries, he spent months in the gym, worked with a therapist and exercised at home to strengthen his leg muscles. He worked primarily on the four quadriceps muscles in the thigh using a treadmill, bands and weight machines – all under the guidance of his physical therapist.
While he was investigating surgeons, implants and hospitals Craig discovered BoneSmart. He began to read the extensive information available on the forum and website as well as the threads detailing others’ experiences with knee replacement surgery. “For people looking at this type of major surgery with its rehab that can be intensively painful, as well as mentally and emotionally challenging, it’s difficult and depressing enough. But add in the negative assessment of my future outlined by the surgeons I talked to and the road ahead became frightening. I was thankful to have found BoneSmart and I’ve been reading it since 2010. It is unique and has great content!” 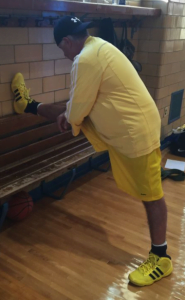 Craig’s biggest question was why many people never fully regain their range of motion after knee replacements. He noted that even the specialists didn’t seem too concerned with pre-conditioning and getting your body ready for the challenges ahead in recovery. He became a firm believer in the idea of strengthening muscles he would depend on in recovery. Craig reasoned that lacking muscle tone could make recovery more difficult and a longer process. So, even though there are no guarantees with recovery, he decided to give himself all the opportunities for success he possibly could. And for Craig, this was a winning formula! “I worked hard in the gym months before the first TKR and hard months before the second TKR. I worked on a variety of the machines in the gym to strengthen all my leg muscles, especially the 4 quads.”
Craig’s total knee replacements were done by different surgeons about two years apart. The first by Dr. Scott Marwin (NYU Langone Orthopedic Center) was at 59 years old and the second by Dr. David Mayman (Hospital for Special Surgery) at the age of 62. Both surgeries went well, but he had an especially good experience with post-surgery pain management at the Hospital for Special Surgery. One day in the hospital, then he was released and on his way to recovery!
Once Craig was home, he maintained a strict recovery regimen in addition to his therapy:

For the first 2 weeks Craig worked with a home therapist and had a nurse monitoring his progress. By week 3 he was ready to transfer to outpatient therapy to up the intensity a bit. Formal therapy was done 3 times a week for many weeks and in between sessions he walked slowly on his home treadmill. After several months, Craig made his first appearance at the gym and gradually began to use the machines to build both upper and lower body strength. He incorporated stretching statically, bands and kettle bells into the program as he went along. At each step, Craig was careful to make sure that none of the exercises resulted in significant pain or increased swelling. It was a slow, steady process of increasing strength and agility. 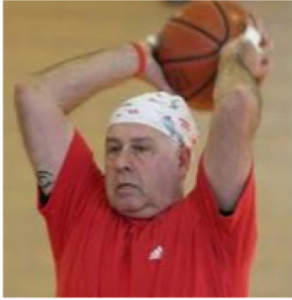 Six months after the second knee replacement, the big moment came. Craig was ready to start shooting some hoops. About 9 months after the surgery he resumed playing full court basketball three times a week. He had successfully worked his way up to the grueling 3-hour sessions with men 25 years younger. And much to his joy, he and his knees were holding their own in the games!

In the years since this recovery milestone, Craig has continued to play full-court competitive basketball on Mondays, Wednesdays and Saturdays plus coaching and managing the Staten Island Basketball League. This tallies up to more than 1500 games and active court time well in excess of 18,000 minutes. “Add to this the hundreds of hours on the treadmill and the time I spent on the leg weight machines putting pressure on my knees … and I feel powerful! Several of my basketball friends have approached HSS to seek consultations and operations for legs and hips as I have become a walking, talking, playing advertisement for this type of surgery. I always tell them the same thing: I was very fortunate to have found an excellent orthopedic surgeon in Dr. Mayman and that I was blessed to have found a great hospital. How many guys my age do you know that can play aggressively and at a high level even without having knee replacements?” 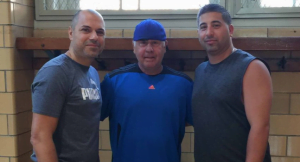 A positive outlook is critical for success

His aggressive approach to rehabilitation and positive mental attitude combined with his doctor’s surgical skills helped Craig achieve his goal of returning to basketball and the life he loves. He may be unusual in his physical, mental and emotional intensity during rehabilitation from his knee replacements, but playing basketball serves as Craig’s means for maintaining mobility and health as he ages.
We’ll let Craig’s own words finish out his remarkable story:
“These successes with my knee replacements go hand in hand with the way I have lived my life – maintain a positive outlook, be aggressive in business and in sports, and respectfully question people who claim to be experts (like surgeons). The human spirit and the will to succeed trumps all. Knee replacement surgery is one of the scariest operations to face, but your fear can be mediated in many ways with information that you receive from great resources like BoneSmart. Ask questions and get involved with your treatment. Find out the “why” of everything!” 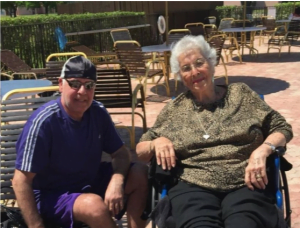 2015 – Welcoming the sunrise with Mom in Florida

My one regret is that I only have 2 knees to replace!
(Just kidding!)

If you’d like to watch Craig and other
members of the Staten Island Basketball League in action, check out this YouTube
video:
https://www.youtube.com/watch?v=W-TuQzZQyTU

If you have questions or comments you’d like to make regarding Raucher’s Spotlight story and his recovery, please click on this link and post in his recovery thread on the BoneSmart forum.
https://bonesmart.org/forum/threads/both-knees-replaced-and-back-to-basketball.52040/