To explain about bursas - they are a natural little sac made by a) an extrusion of the joint lining (synovial membrane) in any joint or b) a natural pocket over a bony prominence. The little folds need to be there to allow for movement much like you need pleats in a blouse so it doesn't stop you moving freely.

In joint related bursae, the fluid flows freely in and out of these folds and sacs and as long as they open into the joint, all is well. But should the sac or fold become sealed off from the joint, the fluid gets trapped in it. The synovial membrane's principle function is to produce synovial fluid, that straw coloured viscous, fatty fluid you find in joints that lubricates them and keeps them healthy. One of the by-products of arthritis is that the synovial membrane gets hyperactive and produces too much of this fluid.

Now the sac that becomes sealed off is still lined with synovial membrane and is still producing the fluid so the sac begins to fill up like a balloon being filled with water. Mostly the pressure opens up the connection to the joint so it goes down again or the fluid just gets absorbed but occasionally neither of these things happens and the bursa just gets bigger and more painful. That's not so bad - it may or may not be a problem but IF the bursa becomes inflamed and/or infected, then you have a problem. Usually they just need to be dealt with by a course of antibiotics and in extreme cases, surgery.

With a bursa on a bony prominence, there is usually very little fluid within it but when it becomes inflamed, fluid can begin to build up and the bursa becomes swollen as well which is painful on its own!

The bursas are the blue and red bag thingies in this image. 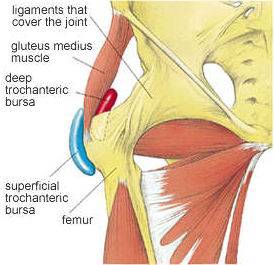 All of these ....
upper thigh began to ache
both a deep ache in the bone
distinct pulling pain in muscles both along inside and outside of thigh
knee begins to hurt
limping because it hurt so much every time weight is put on other leg
tenderness to touch at the trochanter
extreme tenderness to touch along upper femur
sometimes incision and upper thigh just below it feel a bit numb
some off & on pain deep in buttock, and more even lower back and around waist

... can be attributed to inflammation of the iliotibial band which is a huge muscle and ligament running down from the iliac crest, down the outside of the leg and then wrapping around the side and front of the knee. Where it passes over the greater trochanter (the pink bit), it can have an area of acute inflammation and possibly even a bursa which will be extremely tender.

The bursa is where the muscle glides over the femur, or more specifically, the greater trochanter, as shown in this image. The muscle concerned is known as the tensor fascia lata which is closely associated with iliotibial tract (it's called a band where it passes across the front of the knee) so would also be caused by whatever is caused ITB problems. 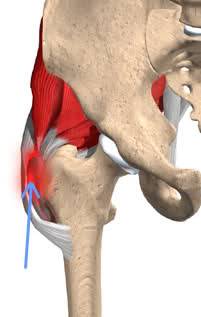 Sometimes this is simply an area of inflammation and sometimes it also has a little bag of fluid in the centre known as a bursa.

If this is an issue that you would probably benefit from easing off on the gym work for a while, from icing the area regularly and some NSAIDs like ibuprofen (unless you have a medical reason for not using them).

But a good and speedy solution is an injection of cortisone directly into the bursa or the area around it. Since this bursa is very superficial here, it is an easy procedure to perform.

IOW, bursitis is usually a signal that you're overdoing things and you should therefore take it easy on yourself for a while.

You can also diagnose it yourself by just walking your fingers up and down the area until you find the very painful spot on your thigh. You might even feel a lump there, a soft round lump which could be as large as a hen's egg
You must log in or register to reply here.