Too heavy for knee replacement?

I think the average person probably believes that it's excess weight (or injury) that causes knee problems. We know better.
OP
OP
S

Hi all, here's an update: I saw the pain nurse. She told me to take paracetamol and go swimming and come back in 3 months. She said carry on losing weight. They also won't do my facet joint injections til I weigh less. I mean for goodness sake. I just left. What a waste of time. Then I saw my GP who won't refer me to another knee surgeon until I have seen the rheumatologist, and who knows who long that will take on the NHS. I also saw (privately) a neurologist who has written me a prescription to try Sativex (cannabis-based medicine) but the pharmacist is clueless and wants it on a different form and doesn't understand what it is, and it will cost me £300+ for one months supply. I am thinking of going back on the Amitriptyline - half dose- as last time it wrecked me. So, still no help re. my knees. I really am going round in circles.

Oh scarlett - you just haven't seen the right man yet, not even near. Neurologist, rheumatologist - neither of these are going to get you your knees done.
OP
OP
S

I know! But unfortunately, my GP has to refer me, even to see one privately.

scarlett said:
I know! But unfortunately, my GP has to refer me, even to see one privately.
Click to expand...

I am sorry, but that is just plain wrong! How dare the GP make the decision for you! You have every right to see another consultant and I would insist on it! GP needs to get moving!

Going back to your first post indicating that other joints are inflamed may be the reason the GP wants you to see a rheumatologist. But that still doesn't explain why you can't get referred to an OS for the knee. :(

GPs are bearing the brunt of increasing pressure to ration NHS services, with three-quarters saying local rationing of treatments is now adversely affecting their relationship with patients, a survey reveals. The survey of 237 GPs comes at the midpoint of the so-called ‘Nicholson challenge' to identify £20bn of savings in the NHS, with 9 in 10 GPs reporting the pressure on them to ration treatments or services has worsened over the past year.

Over 40% of GPs said they had had to switch patients to a less effective therapy because of local rationing guidelines in the past year. Over a third said they had struggled to get patients to guideline-directed targets, citing restrictions on referrals for orthopaedic surgery as particularly problematic.

I don't have much to add here, but know my thoughts are with you! You really are on a non-stop merry-go-round.
Weight shouldn't be an issue. Part of the reason we get overweight is due to lack of exercise. The pool is helpful, but it isn't the magic cure your caretakers seem to think it is!
My joint issues had nothing to do with weight, it had to do with joint destruction caused by RA with a bit of OA tossed on for extra credit.
Me-thinks you need to become a squeaky wheel! Delaying treatment using weight loss is just plain mean.
Best,
Sandy
OP
OP
S

Thanks Sandy. I know, it's so frustrating. They have even stopped me from having my facet joints injected (I have 2 slipped discs and a lot of back pain) because the doctor found it "difficult" due to weight. Thing is, I don't think I'm THAT big! Not compared with many. I think Josephine is quite right in that the delaying tactics are all down to the NHS and government tightening their belts. They see an overweight lady and they think she doesn't DESERVE surgery cos all her problems are self-inflicted. Not so. I didn't choose to get Ulcerative Colitis, which has made my joints, back and sternum inflame and body attack itself. Also if I fell down the stairs and injured my knees and couldn't walk (like I can't) then I'm sure I'd get an operation!

scarlett said:
They see an overweight lady and they think she doesn't DESERVE surgery cos all her problems are self-inflicted.
Click to expand...

No, that's not how they think. What they are looking at is that the outcome might not be good or that there are difficulties in performing said treatments, both of which are true - theoretically. No-one ever considers it to be self-inflicted or a case of 'deserving it'. 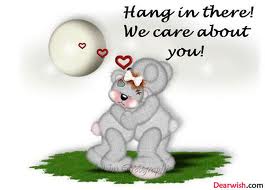 You'll get there, Scarlett. Just don't give up. We're here for you.
K

Interesting conversation. In the US, there are new documentation requirements for joint replacements. Now, as part of the medical record, they want to see what else has been tried before replacement was decided on, what the patient has done or not done etc. Called containing costs. This has NEVER been required and the documentation does not have to be submitted in order for the claim to be paid but it is just a matter of time.

My Insurance company and my hubby's secondary at the time was fantastic when paying for the first 3 surgeries!

They did ask what had been tried previously, hyalgion shots, synvisc shots, and 3 consults. Oh and 3 different types of braces and a four wheeled walker with seat. They asked me for permission to see x-rays, and I said they had permission to look at doctor's notes and x-rays because I had nothing to hide!

A week later, the rep for the school insurance company called me and asked if I was still walking! I wanted to say, no I am sitting right now, but I acknowledged that I was with difficulty. They said they had seen more than enough, and whenever I was ready for knee replacements, they would pay for it.

Yes that is the way it has always worked for private insurance. Have never had to do this for Medicare. Changes are a-coming

Big Brother is alive and well, eh? I get that costs can be an issue, but so often people who make such decisions neglect to look at what long term costs will be incurred through current inaction. And can you put a dollar value in quality of life?

Josephine said:
No, that's not how they think. What they are looking at is that the outcome might not be good or that there are difficulties in performing said treatments, both of which are true - theoretically. No-one ever considers it to be self-inflicted or a case of 'deserving it'.
Click to expand...

Unfortunately, about 15 years ago I had an OS yell, literally yell, at me, blaming me for my knees and everything else that was wrong with me, up to and including hyperextensive joints and other things that I was just born with. The lovely man also told me my mother had been a difficult patient even though she thought highly of him. He went on to say I urgently needed replacements and to see him again in 20 years when I was "old enough to deserve them." Yes, he really said that. Needless to say I left in tears, but I also told him off for being such an insensitive jerk. Brilliant from what I'm told, but a real piece of work. There aren't many like this, thank goodness, but they are around. I still get angry thinking about this encounter.
K

The people making these decisions for us are not necessarily qualified to do so. Retired pediatricians deciding on whether we should have our joints replaced

MerryS said:
The people making these decisions for us are not necessarily qualified to do so. Retired pediatricians deciding on whether we should have our joints replaced
Click to expand...

That maybe, Jeb, but I was referring to the NHS.

Well Merry, I do understand what you mean about Medicare! A friend of Mom's is hobbling on two canes and is in excruciating pain. Before this mandate came through, they were going to do knee replacements. Now, they are taking a well it costs a lot of money; our government that is! I don't usually mention politics because people are on both sides of the fence! I just know that our medical care for seniors seems to be getting worse! Heaven help us!