Hey @Timo50 I read through your pre-op post too. Recovery isn't the most fun thing in the world - but ultimately it makes for a HUGE improvement. I had my first replacement about four years ago, and put it off as long as possible. Now my other hip is going bad, and I can't wait to just get it done with. Stay strong, don't do anything crazy, and you'll be better than you have been in a long time.

I too am having problems sleeping, it is very difficult to get used to sleeping on your back. Counting the days to when we can sleep in whatever position suits us the best - about nine weeks to go though.... Your recovery is going really well.
OP
OP
T

All still going ok, though I thought I would be a bit further along regarding walking with aids.

I saw the physio last Thursday who seemed happy with my progress, I am down to one crutch when walking, the physio suggested I try no walking aids around the house, but I am finding this really difficult, not so much through pain, maybe through limping as a habit and lack of confidence? anyhow, working on it. I also have a bit of pain from my IT band, which seems worse after walking.

Back sleeping is not so bad now, although I do wake up a few times during the night, also getting a bit of back pain from lying on my back.

I spoke to the physio about getting in and out on my bath to shower (I have an over bath shower), I bought an aerobic step and use this to step sideways into the bath, bringing my operated leg up from behind, so not going to break the 90deg rule. The first shower in 3 weeks felt so good!

I still have the itchy stockings, which drive me mad some nights, I think I will end up scratching through them at some point, still, only 2.5 weeks left to wear them.

Glad to see that you are doing well.
For your back, you might try using a pillow under your knees/upper calves to take the tension off the muscles in your back. My home PT guy recommended it, and it helped a lot.
Best wishes for a smooth recovery.

That is great too read this update. You have to remember that 3 weeks post surgery is so so early still. I can appreciate what physio told you about walking with no aids, but if your body isn’t feeling quite ready for it, then my suggestions would be to listen to that.
I remember I also counted the recovery improvements DAILY because I really want to always be further along than I was(and I was right on track the whole time). You are already down to 1 crutch and that’s quite the step. Give yourself more time with one crutch to build the muscle and stamina for your hip to be able to support itself without an aid.
You will get there, and you will get everything back. You’ve already achieve quite a bit in 3 weeks, try to remind yourself you had a major surgery and need the time to heal and build those new muscles that you maybe had lost pre-surgery.

@Timo50 there is no harm or shame in continuing to use an assistive device when walking. If you don't quite have the confidence and/or strength you continue to use that device. Much better then chancing a fall. Also continue to use an aid if you're still limping. Depending on how long you were in pain and limping prior to surgery can affect how long you may need an assistive device.

I used my walker for a good month and a half, maybe longer. I actually thought I was ready but the PT I had recommended I continue to use it for a while longer. I also used my cane for probably another month and a half after ditching the walker. Working on proper gait and slowly building up my strength were more important than ditching the assistive device. Balance is another thing to consider as well.

For back pain from sleeping on your back I used a wedge type pillow so that my head and torso were propped up at an angle. And, lots of pillows!
S

Lynne54 said:
I too am having problems sleeping, it is very difficult to get used to sleeping on your back. Counting the days to when we can sleep in whatever position suits us the best - about nine weeks to go though.... Your recovery is going really well.
Click to expand...

Lynne, I hated sleeping on my back. But I’ve started sleeping with a small orthopedic pillow between my legs and I’m on my non operated side. Working for me. If I wake up, I may switch to my back for an hour or less but then back to my side with the wedge. It’s a small pillow with an indentation for your knees. But do whatever works for you.

Slow and steady wins the race,, you will lose your assistive devices when you are ready and it may just happen suddenly. You are so early still, in the recovery race!
I remember when I needed to start sleeping on my back, only. ( years ago for ironically, a bad back problem) It took me weeks and weeks to adjust but using pillows tucked beside me on each side could help me feel like I was snuggled onto my side.

Hang in there, you are progressing right along!
OP
OP
T

Hi all.
4 week update, all still going well, but I cant wait to get rid of the itchy stockings, less than 2 weeks left

I'm down to one walking stick now and alternate between using it and not using it when I go out for a walk. I still have a bit of a limp but I think that will sort itself out in time. my hip/leg is starting to feel looser, as in more normal, although I still have some swelling.

Sleeping has improved, I have a pillow under my knees and 2 pillows plus a large "v" shaped pillow behind my, head, I find that this is pretty comfortable.

Hopefully in 2 weeks, my surgeon will release me from the restrictions and I can start getting back to normal, but I'll still take care until the 3 month mark.

Timo50 said:
I still have a bit of a limp but I think that will sort itself out in time
Click to expand...

Here’s a tip -
Try heel-toe walking when you're limping.
This involves striking the ground with your heel first, then rolling through your heel to your toe, and pushing out of the step with your toe.
It takes a concentrated effort, but I believe you'll notice a difference. Give it a try.
Here is a visual on heel-toe walking - 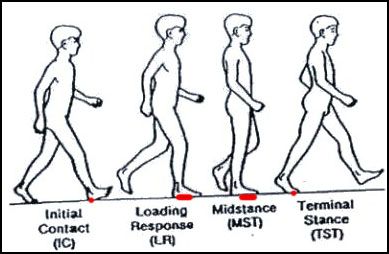 Thanks for the update. You seem to be doing well. I’ll bet it will be a happy day once you get to toss the hateful compression stockings.

Timo50 said:
I still have a bit of a limp but I think that will sort itself out in time
Click to expand...

Here’s a tip -
Try heel-toe walking when you're limping.
This involves striking the ground with your heel first, then rolling through your heel to your toe, and pushing out of the step with your toe.
It takes a concentrated effort, but I believe you'll notice a difference. Give it a try.
Here is a visual on heel-toe walking -

Thanks for the update. You seem to be doing well. I’ll bet it will be a happy day once you get to toss the hateful compression stockings.

Thanks Layla, I'll give this a try.

A very positive update @Timo50 . It’s great to hear about your improvements.

Almost 5 weeks and still cant walk properly without a stick, is this normal?

I'm doing all the exercises, and walking 3 times a day, as soon as I try and walk without the stick, its back to limping, I'm 58, fairly fit, and was very active right up to the op, seems like I was better off pre op.

@Timo50
I am sorry you are feeling frustrated and disappointed that you haven't lost your limp.

Timo50 said:
Almost 5 weeks and still cant walk properly without a stick, is this normal?
Click to expand...

We certainly have had many members who have had to be patient while they worked on a normal gait....I think Elf1 said it was several months for her in an above post.
You mention the limp as possibly being a "habit" and for me, I was deemed a toe-walker which had become my unintentional default walking to take pressure off my two trashed hips.

We are not only recovering from surgery, but also from the years of bad gait and posture proceeding surgery.

I also remember at the same point in my recovery, that my deficits were concerning and cabin fever and postop blues were at their peak.

I had gone through the stress of pre-op worries, and the initial recovery stage and was ready to find out if this hip replacement "cure" actually worked.
I know it is hard to be patient, but there are many members who have been where you are... as 5 weeks IS still early in recovery.
Keep the Faith, friend.

Don't know if anyone mentioned it but shoes can be the problem if you're wearing the old shoes from pre-op. Shoes will have a wear pattern that can cause you to limp after the new hip. My thing to learn how to walk again was going to the big store nearby and using a shopping cart. It gave me stability and protection and I could walk slowly and with good posture. I could go at my own pace and lean on the cart for a rest.
H

I've noticed I am having to relearn how to walk after years of hip pain. Changing our normal gait in compensation to our hip pain took a long time. It's going to take time to get it back. I've also noticed certain muscles have atrophied due to compensation for the bad hip and they will take time as well. We'll get there!

I guess limping for nearly 10 years isn't going to go overnight, I have physio on Thursday so will mention this.

Having a therapist assess your gait and offer tips could be really helpful.
Just be mindful that Time truly is the Greatest Healer.

I had "both at once" so my experience was different, but at 5 weeks, my gait was certainly not normal.

I just had to remind myself often - most of my "hiccups" were attributed to tightness.
Tightness is a normal occurrence after this kind of major surgery. Your surgeon did major carpentry work and disturbed every millimeter of soft tissue in this area. You aren't tight because your muscle is underused and needs to be stretched and rehabbed. You're tight because your tissue is healing... If a long full step right now is causing pain and limping, don't take long full steps. Take smaller steps. Take a short walk several times a day, instead of longer walks. Use your cane. Use ice. Rest a lot.

This isn't the time to do anything to excess. Baby steps now, and lots of patience, pays off big time later. Recovering from self-induced tendinitis can end up taking weeks or months. Consider yourself as still recovering from surgery and structure your return to your life as a slow, gradual process where you introduce very small increments in activity, and then give yourself time to see how you react to it.
All temporary, and worth the patience. I am certainly glad I am able to get back to a full happy life
You must log in or register to reply here.