Swollen and stiff knee: what causes it?

Swelling is fluid in the tissues and is a perfectly normal reaction to trauma - anything from hitting your thumb with a hammer, twisting your ankle or have a knee replacement! All of those will cause the body to send blood to the area to protect and start the healing process. With the blood also comes tissue fluid which we sometimes also call serum or lymph. If it gathers in excessive quantities the resultant swelling can be painful all on its own, never mind the pain of the injury or surgery.

In the leg there are special reasons why this extra pain and stiffness occurs which you will appreciate if you think of your leg as being like a tube. With any tube filling with water, there comes a point when it is full to bursting. Elsewhere in the body, including the thigh, this is no big deal but in the knee it is a BIG problem because there so little space and the skin is tight around the joint. So there is a limit to the amount of fluid or other tension that this area can accommodate and like all over filled tubes, the knee becomes stiff and won't bend.

Swelling also doesn't always show up as puffiness on the outside. It can be internal and the sensation then is that the tissues round the joint feel hard and ungiving also often warm or even hot to the touch.

Another comparison is that of a leg in a plaster cast. You know well that a knee cannot bend when in a cast. You also know it's not because the knee is incapable of bending but because it is being constrained! 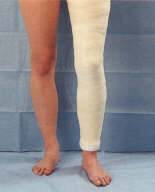 ​
So the first order of business is to not get frantic because your knee won't bend!

Second is to do the following

The importance of managing pain after a TKR and the pain chart
Elevating your leg to control swelling and pain
Using ice
Some suggestions for home physio (PT) and activity progressIt's never too late to get more ROM!
It's Worth the Wait for ROM
Full ROM can take a while​
Sometimes it seems that PTs and surgeons get a bit over enthusiastic about this issue and start mentioning the dreaded MUA, completely forgetting this basic difference between a swollen knee and a knee with adhesions. Of course some people do get adhesions but usually it's best to leave it a while before MUA to be absolutely sure that's what it is and that it's not just swelling that's the problem. Waiting a few more weeks is not going to cause any unsolvable problems.

However, it has been documented that MUAs done too early - before 12 weeks - will be unlikely to sustain any improvements achieved under GA since the surgeon was able to bend the knee against the swelling pressure and without the obstruction of pain. Such results, it is recorded, are rarely sustained once the patient has recovered from anaesthetic and ends up being even more disillusioned and depressed, also possibly being placed under even more pressure by PTs and surgeons to do better like it's their fault their ROM isn't improving! Of course, the truth here is that the MUA will have caused even more swelling and pain which will further contribute to the loss of the MUA results! Sometimes it seems like the patient just cannot win!

MUA: the ineffectiveness of early MUA

Another negativity often aimed at the patient is the "No pain, No gain" nonsense. This catch phrase was coined in the 1980s by a well known actress who was making a name for herself with fitness videos. In the intervening years, I have worked with numerous surgeons who roundly castigate this notion as being the cause of more ligament strains and tears than they had ever seen before. So if it's not good for fit people, it's certainly not good for people recovering from major surgery! Most certainly not! In fact the proven and much wiser version is NO PAIN MORE GAIN! Meaning no exercise should ever be done to the point of pain. To the point of discomfort - certainly. Maybe a teensy bit more - certainly. But never ever beyond that point.

Because it increases the swelling ...... which is where we came in! So if you still haven't got it, go to the top and read this all again!