Hi - I had my left Hip replaced in July 2016 at Sunderland hospital. (Surgeon Mr Roysam) The stem that goes into the femur was a new short experimental type. I am one of around 400 patients in the UK on a ten year trial using this shortened version (to avoid bone splinter, aid recovery, etc)

No problems with the actual hip replacement, but shortly after the surgery, a large swelling developed near the op site on my left hip area. It grew to about fist size and appeared to be filled with fluid. I was told this was quite common following surgery and would reduce over time.

Following two MRI scans, one ultrasound, two biopsies this has still not been resolved. The swelling is still the same size and the liquid has virtually turned solid. In addition, it is now causing pain around my groin area and affects my walking. The lump I am told is not malignant but they really do not seem sure how to progress! I have my next appointment on 3/1/18 when I hope they will come up with some developments.

I would like to know from forum members whether anyone has had a similar problem following Hip replacement surgery?

I might add that I have had both knees replaced, spinal cage surgery and pins in both shoulders- all as a result of Osteoporosis Arthritis. I have had no problems whatsoever following these operations.

Hi @ChefClay
Welcome to BoneSmart!
I'm sorry you're struggling so with no answers. You have been through a lot of surgery.
Thankfully the other surgeries seem to be serving you well. While I have no advice our Nurse Director
@Josephine may be able to advise you. Your situation sounds rather complicated.
Hopefully that all changes in the new year.
Best wishes you soon get answers leading to resolution.

Would you please share dates for each surgery so that a signature can be created for your thread.
I thank you in advance

@ChefClay Welcome to BoneSmart! I hope Josephine can help you with this. We have had many members who developed hematomas post op but they are normally absorbed by the body. Glad you are seeing someone soon. Please do keep us updated.

ChefClay said:
The stem that goes into the femur was a new short experimental type.
Click to expand...

Ever get a name for it? One or two have been on the market for quite a while. They look like this 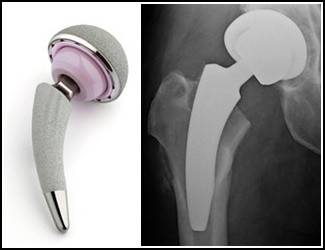 ChefClay said:
a large swelling developed near the op site on my left hip area.
Click to expand...

Can you tell me the site of the swelling using this chart?

Thank you for your interest

The new joint was the ‘Genesis 2’

With regards to Mr Roysam, I should have mentioned that he is a lovely chap and I have my utmost faith in him. (He did the spinal procedure as well as my hip)

I will update my post later with regard to op dates and also the site of swelling.

ChefClay said:
He did the spinal procedure as well as my hip
Click to expand...

I'm not surprised - his main speciality is spinal surgery!!

So the site of your pain is here? 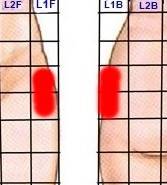 ChefClay said:
a large swelling developed near the op site on my left hip area. It grew to about fist size and appeared to be filled with fluid. I was told this was quite common following surgery and would reduce over time. Following two MRI scans, one ultrasound, two biopsies this has still not been resolved. The swelling is still the same size and the liquid has virtually turned solid.
Click to expand...

I am totally amazed that they went through all this! It's perfectly clear to me that what you have there is Trochanteric bursitis. It's very, very common and easily fixed with an injection of cortisone. I've had it twice since my first TKR.

ChefClay said:
The lump I am told is not malignant
Click to expand...

Malignant! Good grief - how they could even think that is a mystery to me! Was Mr Roysam involved with these investigations?

ChefClay said:
In addition, it is now causing pain around my groin area and affects my walking.
Click to expand...

I doubt this is connected. Can you tell me site of this pain from the chart?
OP
OP

Mr Roysam has instigated all investigations regarding the swelling.

The non malignant result was given after I had the MRI scan.

Nothing at all has been mentioned regarding injections. The only procedure mentioned that was a possibility was ‘invasive surgery’

The pain from the swelling spreads directly across the front abdomen till the middle above the groin. I would term it more discomfort than pain.
I personally think it is happening more because my recovery has been hindered by this swelling and my gait is not correct at all, therefore causing a constant ‘twisting’ across that area.

I am pleased that you consider it to be a common swelling, but cannot understand why Mr Roysam and the Radiographers never came up with this suggestion.
Shall I mention it to him on the 3/1?

Thank you for all your help and advice x

A suggestion - next time you see him, tell him Sister Fox thinks it's just a trochanteric bursa and see what he says!

I had my left hip fully replaced in July 2016.
Sadly I have developed major problems which will require revision surgery in the near future.
Can I ask if anyone else has experienced problems with this type of surgery?
I will add further details to my initial post.
Thank you - Paul (NE England)

@ChefClay you will notice that I have merged your two threads together as we prefer that members in recovery only have one thread.

This is for three reasons:
1. if you keep starting new threads, you miss the posts others have left you in the old threads
2. it often ends up that information is unnecessarily repeated
3. it's best if we can keep all your recovery story in one place so it's easily accessed if we need to advise you.

Please keep all your questions and updates on this thread. If you would like a new thread title just give a shout.

Is the issue a problem with your implant? Perhaps a bit more detail about the latest findings posted here might help us to advise you.

ChefClay said:
Sadly I have developed major problems which will require revision surgery in the near future.
Click to expand...

@ChefClay what kind of problems? Can you be more specific?
OP
OP

Hi - I deliberately kept the threads separate as it would may have seemed a contradiction when I was praising the surgeries I had undergone, then in the next post explaining that I had problems post-op.

Also, in reply to the details of the problem, I specifically said in the post that I would add the details later.
I just wanted to clarify something before I did.

As stated in my post, I am now able to provide details of Hip problem.

Since surgery (July 16), a swelling had gradually developed over the site op.
I was told that it was post-op fluid and would gradually disperse.
Since then the swelling got much bigger (now the size of a clenched fist). This causes me occasional stabbing pain and continuous discomfort.
I had numerous scans, biopsies and MRI scan to try and identify the cause.
Last Friday I was at hospital to see the Hip Specialist.
Evidently, the new joint has created metal debris around the femur and formed calcium deposits (new bone growth). This can be seen quite clearly on the scans
This has resulted in my Ion Cobalt level having nearly double the reading of what is acceptable in the bloodstream.
Therefore, I have to have the Hip taken out asap and the area cleaned of debris with the new joint removed. This hopefully will stop the increase in the ion cobalt blood levels.

The operation may be in two stages or just one, the consultants are getting back to me about this within two weeks.
Never mind, at least they have identified it before it got worse. Only though because I kept complaining about this swelling!! They have been telling me repeatedly that it was only post-op fluid and would gradually disappear.

Oh that is so awful Paul. I'm terribly sorry you have got to go through this.
I'm glad you kept beating the drum about knowing something was not right.
Hip replacement needs to be taken out ASAP, and the consultants will get back to you in two weeks? How nerve wracking!
Please know we are thinking of you.

ChefClay said:
a swelling had gradually developed over the site op.
Click to expand...

It can't be metal-on-metal AND ceramic. Your Furlong Evolution is actually metal on ceramic and looks like this

Hi Josephine - I am aware of the details, but the Hip Specialist read the notes in front of me last Friday. His exact description was a metal on metal with a ceramic liner. He seemed quite surprised that this type had been used.
I have checked the hospital discharge notes and pre op papers, it is definitely the Furlong Evolution.
So beyond that, I cannot tell you any different.

I have just received my appointment for 16/3.
I will be told then if the Op is to be performed in two stages or one.
Thank you for your comment.

So sorry for what you’ve been though. Thank goodness you kept insisting that there was a problem.
Hope that your appointment on Thursday provides you with a clear course of action. Take care

ChefClay said:
His exact description was a metal on metal with a ceramic liner.
Click to expand...

Sometimes Docs say silly things because they don’t want to explain in technical terms and think we are dolts. I’m sure ChefClay was fobbed off with a less than useful description. It’s the nature of the beast with some Docs. I’ve had to say please talk to me like an adult, not a child. That I don’t want to hear that my blood test is a bit off...I want numbers and breakdowns..it sometimes takes them by surprise that I might actually be educated.

Hi @ChefClay
I'm sorry for your pain and suffering. Also sorry that you will need a revision to gain relief.
Hopefully you get answers on the 16th. Please keep us posted.
Best wishes for comfort as you wait.

What a disappointment and a journey you are on. Good grief!
Hope you are taking it easy...and please know we are rooting for you
You must log in or register to reply here.