The body is a complex and remarkable machine, and the dynamic process of wound healing is a great example of how our body’s different systems, along with the proper wound care products, work together to repair and replace devitalized tissues. But how, exactly, does our body heal?

When the skin is injured, our body sets into motion an automatic series of events, often referred to as the “cascade of healing,” in order to repair the injured tissues. The cascade of healing is divided into these four overlapping phases: Hemostasis, Inflammatory, Proliferative, and Maturation.

Phase 1: Hemostasis Phase
Hemostasis, the first phase of healing, begins at the onset of injury, and the objective is to stop the bleeding. In this phase, the body activates its emergency repair system, the blood clotting system, and forms a dam to block the drainage. During this process, platelets come into contact with collagen, resulting in activation and aggregation. An enzyme called thrombin is at the center, and it initiates the formation of a fibrin mesh, which strengthens the platelet clumps into a stable clot.

​
The 4 phases of wound healing. Healing begins with Hemostasis.​ 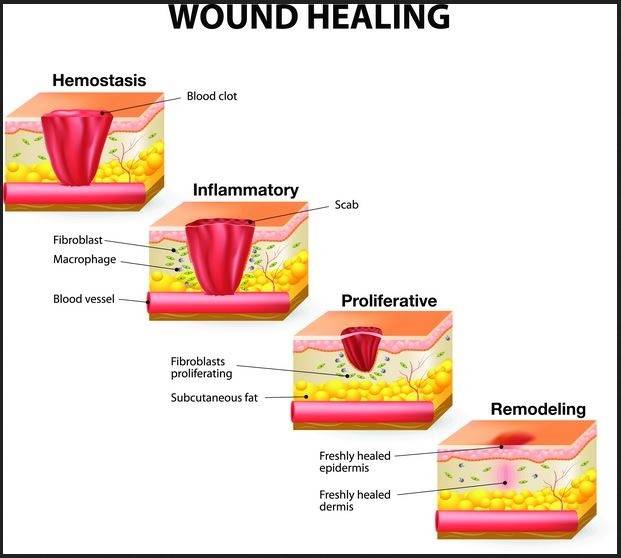 ​
During Phase 2, a type of white blood cells called neutrophils enter the wound to destroy bacteria and remove debris. These cells often reach their peak population between 24 and 48 hours after injury, reducing greatly in number after three days. As the white blood cells leave, specialized cells called macrophages arrive to continue clearing debris. These cells also secrete growth factors and proteins that attract immune system cells to the wound to facilitate tissue repair. This phase often lasts four to six days and is often associated with edema, erythema (reddening of the skin), heat and pain.

Phase 4: Maturation Phase
During the Maturation phase, the new tissue slowly gains strength and flexibility. Here, collagen fibers reorganize, the tissue remodels and matures and there is an overall increase in tensile strength (though maximum strength is limited to 80% of the pre-injured strength). The Maturation phase varies greatly from wound to wound, often lasting anywhere from 21 days to two years.

The healing process is remarkable and complex, and it is also susceptible to interruption due to local and systemic factors, including moisture, infection, and maceration (local); and age, nutritional status, body type (systemic). When the right healing environment is established, the body works in wondrous ways to heal and replace devitalized tissue.
You must log in or register to reply here.