Long time no talk, I can't believe its been nearly 2 years since my last post here

and I hate that but gosh life has been busy! Let's do a real quick catch up, my oldest girl is a sophomore at South Alabama but is transferring in the fall to an online school as a Junior and has relocated to Memphis TN for a job. My middle will be a sophomore in high school in the fall and youngest will be in 5th grade. We've had a lot of school activities canceled due to covid19 and my job (as a school spec ed aide) also layed off, and hubby has been working at home since mid-march. Oh I also decided to go back to school this past fall (online) so I am working on my BS in Elem Ed. Almost done with first year! So on to my knee!

My job as a sped aide, requires a lot of walking and such, and sometimes stairs. My left knee has been fine until the last 5 months or so. I started working upstairs at school in mid Oct and after the first week, it started swelling and I could barely bend it. So then it became elevator use all the time and in Jan I was moved back downstairs (yay!). I went to my doctor about my knee (probably November) and of course the only fix is surgery and to get an injection as a temp fix. So I opted to start with the injection to buy myself some time (and I did not pass out this time) as I knew surgery would have to wait until summer after our cruise in late may/early june (who knew at that time it would get canceled!?). The shot seemed to help in the beginning, but wore off a month or so later and I've just been dealing with the pain since. So I know it's time, our cruise is not happening, I am not working, and dh is home until probably the end of the month working, so what better time to have surgery? I haven't gotten it scheduled yet, they just reopened today, going to call on Monday and see what my options are since elective surgeries are now allowed again. I just think it might be awhile due to all the canceled ones since March will have to be rescheduled too. I hope it doesn't go to far into June, as I really need to get back to work asap in August.

Anyway just wanted to hop back in and talk with everyone as I gear up for another knee replacement! Hope you're all well! I miss you!

@SpaceGirl Welcome back! We will be here again for you. Hope you get your surgery date soon. Keep us updated.
OP
OP

Thanks @Jaycey I sure will I am anxious to move forward, not really scared since I have done this before, but surgery is still always scary! I am just ready to have my life back without pain!

Hi... I should be just ahead of you, also on my second TKR (and a couple hips for good measure).

I feel the same - anxious to move forward but still scared. This will be my 4th surgery in 5 years, but first outpatient! Can't wait to be fully bionic!
OP
OP

Ok so I spoke to my drs office this morning and they are full until mid to late June and I have to come in for an appt before they can even schedule me (thanks insurance) so I have an appt on Monday to "talk" about the surgery and such. I figured it would be June, but it may even be July before it happens. That's really sucky with my job but they will just have to understand I can't come in until I am at least 12 weeks out. Will update again after my appt on Monday. I did ask for a refill on Mobic, because I have been in a lot of pain and have a lot of swelling.

Glad you can at least get in to talk with them next week. Maybe a spot will open up sooner!
OP
OP

@JennyLynne I sure hope so but if not, at least I can plan for this. I have a few things I have to get done before surgery so this gives me the time to do it. I will probably be put on their cancellation list I am sure, but we shall see!
OP
OP

Went to my dr appt this morning, they did xrays and wanted to know if I have any questions. Nope, so now I wait on a call to schedule it. It still looks to be late June due to their booked schedule but will come back and update soon.
Here is the good ol' knees 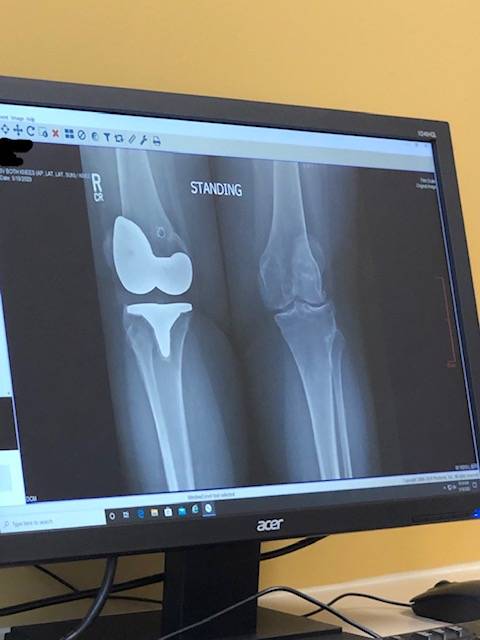 Alright, date set! I go in June 24 for my left knee. Though its a month out, I am okay with that as I have a few things to do before surgery in order to get ready. I am ready to be pain free though!!!

Yes very much so! I hate I won't start work back in Aug with everyone starting back to school but I gotta take care of me! I am sure it'll be fine, and Sept will be just around the corner LOL

Hey, on your Xray is your left knee bone on bone? I only ask because there does appear to be space in there. Mine was completely caved in, well half of it. I got out with a successful PKR.

Anyhow, having gone thru it before are you nervous? I was completely nervous before mine and that was without a pandemic! If I need the other one done I'm pretty sure I'd be a lot calmer.
OP
OP

@Woodpusher it is bone on bone, I did have an injection in November 2019, so perhaps it's still some lingering gel or whatever it is? I can feel/hear the grinding most times, so I am ready to be pain free. I am not really that nervous or scared about the surgery, just apprehensive about the recovery. The first few weeks are rough but since I already know what to expect, I hope to be better prepared for it.

I guess knowing what to expect is the big thing. Best of luck!
OP
OP

Thanks @Woodpusher I am sure it'll be all new again lol but I have went back and read my recovery thread and am reading a few current ones too, I think that will help me remember that it will get better even when the pain sucks!
You must log in or register to reply here.