I am kind of both pre-op and post-op.

I have had problems with knee pain for many years. The only treatment offered was to draw off the water and shoot me with cortisone which I declined. I am kind of a health nut and don't like taking/using any meds that are not absolutely needed. Also, friends have done that and it didn't work for some of them and others had relief but only for a short time. I did do therapy which helped tremendously for a few years and I could at least walk up and down stairs, albeit with pain. I sold my 3-story condo five years ago because I couldn't do those stairs consistently.

In April 2019, my right knee swelled significantly and the pain increased a lot. I went to a sports doctor that a friend recommended. He did x-rays and found that the problem had to do with the knee cap not being on top of the knee so it wasn't tracking correctly which had put a lot of pressure on the joints and had worn them out. He recommended that I see an orthopedic surgeon which I did. He offered the cortisone treatment which I declined again and we scheduled TKR for June. The surgery went very well and recovery, I have discovered, was pretty amazing. I used a walker for a couple of days and then switched to a cane, at least when I was outside, for about 6 weeks. The flat that I live in was built for an invalid so it's pretty easy to have something to hold onto when getting around. I was back to cooking meals and other light housekeeping within three days.

I was pretty aggressive with physical therapy. I had been quite active when I was younger but the knee pain had limited activity a lot so it felt good to be able to do more with the right leg. Unfortunately, I was limited in PT due to the pain in the left knee but still made very rapid progress. I was off pain meds after about 10 days and back at work by the two week mark. Maybe because I was aggressive in therapy, somehow a piece of the knee cap broke off although I'm not sure when it happened as it didn't bother me at the time. I've since discovered that this has been a problem for others in my family. One night in August, I awoke with a lot of pain in the right knee. With difficulty I straightened my leg out and was awakened several more times each time I bent my knee. When I tried to do my exercises the next day, the leg no longer worked right. As there had been no injury, it took several weeks to figure out that the knee cap was broken and that it had shredded part of the tendon. The surgeon had to go back in (September 26) and repair it. I just finished physical therapy for that surgery about 10 days ago.

Tomorrow, I will have TKR on the left knee! I'm so excited to be able to ride the bike, take long walks,swim, go to the Zoo, and just do things that I haven't been able to do for a very long time! 2020 should be a really good year!

@Grammy Ann Welcome to BoneSmart! Can you give me the date of your RTKR and I will pop your surgery information in your signature for you.

I do hope your LTKR recovery goes smoothly. I think you will find our approach a bit different than what you experienced with your last surgeries. Ours is more about giving that knee time to heal. Strengthening comes after you are fully healed.

I wish you all the best tomorrow! See you on the other side soon!
OP
OP

The PT that I worked with in the beginning found that extension was 0 by five days. I am naturally very limber and it just happened. I did do the exercise with the rolled up towel underneath the knee and then push down but it was easy. They did show me how to work on flexion and were very surprised that I had full flexion by about five weeks post-op. I just kept doing the exercise they had showed me and would stop at the first sign of pain. I was very active until about 10 years ago but didn't seem to have lost a lot although it was more difficult to get up and down and I could no longer walk any distance to speak of. Just hurt too bad. Pretty much inactive.

Best wishes for your left TKR @Grammy Ann . Please will you confirm whether your left knee is being replaced on January 2 or January 3? Then we can add that date to your signature as well. Thank you.

I hope it all goes as well as you could hope!
OP
OP

The left knee is being replaced on January 2.
OP
OP

I am reading a lot more of the posts on this site and see that you really do recommend going easy on yourself exercise-wise. Especially in the area of building strength. I think that I need to go read post-op reviews of those who have followed that advice with a second TKR. Just curious how someone fared that did a lot of exercise after the first TKR and not so much after the second one. One man that I know personally really pushed hard with exercise and did very well. Others that I know have struggled with pain. As I think about it, maybe pushing too hard caused the broken patella? Hmmm. Something to consider.

I don't know about your patella situation, but most of us have found that you don't have to be aggressive with the exercise. Move the knee but balance it with rest.
I was one of the ones that extension was no problem. I was close to 0 at the start and did zero extension exercises. I just would lay with my leg straight (as tolerated) and it naturally happened.

Everyone's experience is a bit different.

Grammy Ann said:
The only treatment offered was to draw off the water and shoot me with cortisone which I declined. I am kind of a health nut and don't like taking/using any meds that are not absolutely needed.
Click to expand...

I can understand your position on this but don't write off cortisone so readily. I've been having those injections in my shoulders for years and they almost always work well. Read this article
Cortisone shots: are they safe and is there a limit to how many?

Grammy Ann said:
Maybe because I was aggressive in therapy, somehow a piece of the knee cap broke off although I'm not sure when it happened
the knee cap was broken and that it had shredded part of the tendon.
Click to expand...

You say "somehow" but seem not to understand that the patella (kneecap) is actually part of that tendon (called the patellar tendon for obvious reasons) so it's pretty normal for bits of the bone to come away in the torn tissue. Here is a picture of it 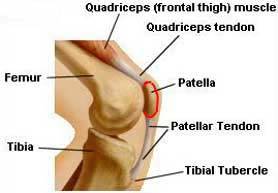 Grammy Ann said:
I've since discovered that this has been a problem for others in my family.
Click to expand...

Yes, these issues are often familial.

Grammy Ann said:
When I tried to do my exercises the next day, the leg no longer worked right.
Click to expand...

A very good signal that the exercising is being overdone

Grammy Ann said:
I think that I need to go read post-op reviews of those who have followed that advice
Click to expand...

Of 'enthusiastic' exercise' I think you meant! You could to worse than read my recover threads forknee 1 & 2. I haven't got around to describing my revision history from last year but it was pretty much the same! Knee recoveries UK style Parts I & II (Josephine)

Grammy Ann said:
you really do recommend going easy on yourself exercise-wise. Especially in the area of building strength. I think that I need to go read post-op reviews of those who have followed that advice with a second TKR
Click to expand...

Well not quite what you asked for, I had both done together and took it easy. See my recovery thread from my sig below
You must log in or register to reply here.