INTRODUCTION: Pseudotumors are sterile inflammatory lesions found in the soft tissues surrounding metal-on-metal (MOM) hip arthroplasties. These lesions are thought to represent an adverse tissue response to metal wear debris and may explain the high rates of failure widely cited in the current literature. However, the etiology remains unclear, with recent studies suggesting that pseudotumors can occur in patients with well functioning prostheses. We sought to investigate further the relationship between pseudotumors, wear rate and component orientation in a large series of retrieved MOM hips.

METHODS: We performed a well-powered study of 105 consecutively revised patients with current generation large diameter MOM hip arthroplasties. We performed both cross-sectional and matched case-control analyses to compare component position, pre-revision blood metal ion levels and component wear rates between two groups of patients according to findings on metal artefact reduction sequence (MARS) MRI scanning. Patients demonstrating evidence of a pseudotumour were compared with those that did not (Table 1). Component wear was measured in our retrieval laboratory using a roundness measuring machine.

RESULTS: In this series, 69% of patients demonstrated a pseudotumor on pre-revision MARS MRI. No significant differences were observed for whole blood metal ion levels or component wear rates when patients with pseudotumors were compared to those without (Table 2). Additionally, patients with well-positioned hips demonstrated a similar prevalence of pseudotumors as those with cup positions outside of Lewinnek’s ‘safe zone’ (67% and 66% respectively, p = 0.64). The distribution of pseudotumors according to cup position is shown in Figure 1.

DISCUSSION AND CONCLUSION: Pseudotumors were commonly diagnosed prior to revision of current generation MOM hip arthroplasties, but were not associated with component malposition, raised blood metal ion levels or high component wear rates. This would suggest that patient specific factors are likely to be more influential in the aetiology of adverse tissue reactions in patients with MOM hip arthroplasty. 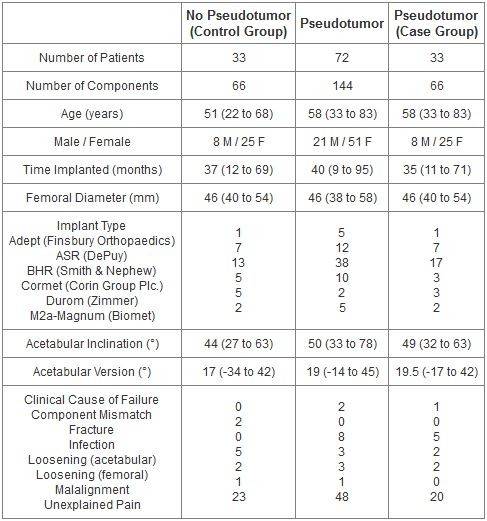