Numb area after TKR: how long will it last?

I'm cataloging the progress of my numb area so you can see how it progresses.

To start with, the reason for this numb area is simple. A nerve called the saphenous that comes down the inside of the thigh and on into the calf. It has a small branch called the infrapatellar branch that goes across the front of the knee and provides sensory input from the skin in that area. You can see it here 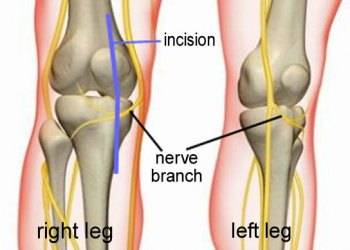 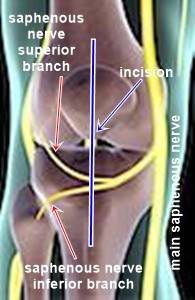 As you can see, it's in the path of the incision so cannot avoid being cut.

I had my knee replaced on March 17th 09 and this is the progress of my numb area thus far. I shall be updating it as time goes on. 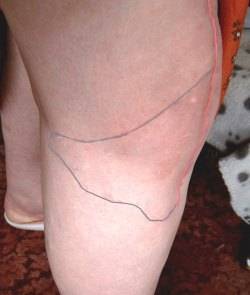 This is on the 9 month anniversary 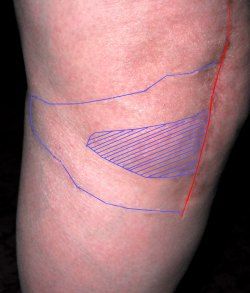 When tracing the outline of the numb area this time, I was delighted to discover a patch in the centre, the hatched area, that seems to be regaining sensation! It's not quite there yet and it mostly feels like intense pins and needles though only when I touch, rub or knock it! I've been experimenting with trying to kneel and that was when I first noticed it. So pins and needles really do indicate the return of nerve healing! Woopeee! Interestingly, the blue hatched area has developed which is a patch of intense pins and needles when I press on it, lean against something or try to kneel down! Other than that, the area seems to be decreasing nicely.

Update August 2011: Seems I was a tad over optimistic then! As of this date, no further progress on my numb patch and it very much looks like mine is going to be PERMANENT!!
Another update June 2013: sure is permanent!

Let me give you a little anatomy lesson ...

A nerve, any nerve, is actually made up of hundreds of little 'nervulets' called axons, much like an electric cable is made of of a lot of fine wires. Groups of these are even contained in an inner sheath and a number of those groups within the main sheath called the myelin sheath. 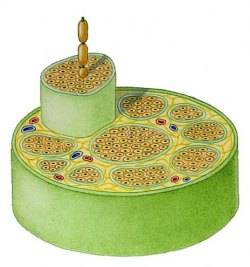 When a nerve is cut and the ends are actually sutured together, the axons within seek to grow out to their opposite numbers and join up again. 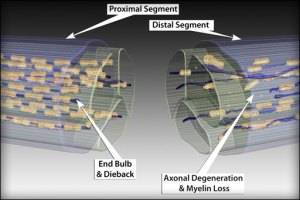 Some of them might succeed in this gargantuan quest, a few do but the majority don't and end up wandering off into space feeling extremely confused and lost! Others actually die off in despair! like this 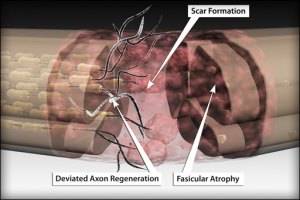 But when it's a nerve that's cut in the skin, in the process of an operation like a TKR, the nerves are only roughly approximated as the wound is sutured shut and not positioned together with any accuracy. In other words, it's pure luck!

So the upshot of this being that there will be some return of sensation in the affected area. If you are really, really lucky you will get a lot of return. But a lot of people will just get a small amount of return and some really unlucky ones (like me!) will get no return at all. It's all about how successful those little axons have been in finding and joining up with a partner axon on the other side of the great divide!

Now my knee is still as dead as a dodo and after almost 3 years, I expect it will stay like that. I have some funny feeling if I rub it and if I bang it, it hurts but generally speaking it's totally numb. Guess my axons were a little too laid back to make it, just like me!

Great announcement! ​
It's been 5 years a few days since my TKR and I've always been resigned to the fact that my numb spot appeared to be permanent. After all, 5 years is a long time and surely couldn't take my nerves that long to heal. Only conclusion, they're not going to.

But a few days ago, prior to seeing my surgeon about my left knee, I was rubbing both knees to remind myself what a 'normal' knee felt like and realised to my joy that they both felt the same! The numb area is no more. It's gone.Totally.