The original “Morse taper” was invented by Stephen Morse in the 1860s for machine tool operators, to install or remove tool bits quickly and easily whilst maintaining precision. In Orthopaedics modularity was first introduced for Total Hip Replacement (THA), as a result of the need, to combine different materials, for example cobalt-chromium or ceramic heads on titanium-alloy stems. Modularity also allowed the prosthesis to be adapted to the patient’s anatomy. These two benefits of modularity have contributed to the clinical success of joint replacement.

In the early 1990s, 90% of femoral stems ion use were modular1. It was recognised that the head of an implanted THA is exposed to torque as a result of joint friction, although the difference between the fixation strength and the friction torque was not as great as expected. Nevertheless, assembly and loading is crucial to optimise taper connection strength2. Problems with modularity were recognised2-5, but despite these problems, designs with additional modular connections such as bi-modular primary stems and modular revision stems were introduced (Figure 1). 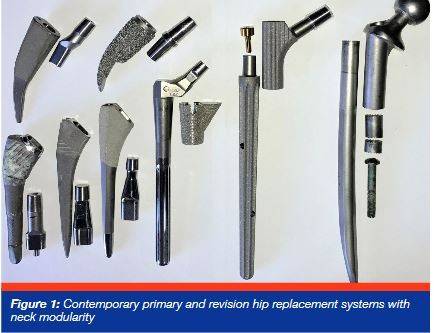 Several other design modifications occurred at around the same time. These included reduction of the taper length and diameter to increase the range of motion, whilst increasing the diameter of the prosthetic head to prevent dislocation6. These larger heads, articulating with traditional polyethylene (PE) increased PE wear. Therefore metal-on-metal (MoM) joints became more popular, as studies indicated that MoM bearings greater than 32mm in diameter produced less wear7. Unfortunately the opposite occurred in practice with MoM bearings above 32mm diameter causing 41% of metal related pathologies8.

This could be due to the breakdown of the required fluid film, leading to unfavorable lubrication for large MoM joints9,10. However, there was also an increase in the popularity of minimally invasive surgery (MIS), and the small incisions might have led to increased taper contamination as well as difficulties assembling the taper accurately. Both of these factors can increase the risk for fretting corrosion6. These design and surgical issues, combined with increasing patient weight and activity, may explain the increased fretting and crevice corrosion at the taper interfaces of modular components5. In any case many bi-modular stems and MoM bearings with large diameters have been taken off the market.

Loading of Tapers:
Tapers are designed to be loaded along the taper axis and perform poorly under a bending load. In the patient the magnitude of the bending load is influenced by many factors including the stem offset, head length, head diameter and especially the lever arm between the hip joint and the taper interface. Higher bending loads are associated with an increased risk of micro-motion at the taper interface, which is directly related to the risk of fretting corrosion. Consequently it is unsurprising that there is a higher rate of metal related pathologies with modular components and an increased fracture rate of modular revision stems.

Discussion:
How do we reduce the risk of clinical failure in the future? There have been 40 papers

reporting retrieval analysis in the last decade. However, the analysis typically only reports the implant with no information on the other two important factors – the surgical procedure and the patient. If the implant is the ‘root cause’ for the failure this approach will work.

However, most published studies fail to identify the root cause of failure, and failure is in fact multi-factorial. Retrieval studies rely on the detailed description of the observed damage and changes to the implant components (Figure 2). The same damage or change then has to be reproduced in the laboratory, under defined conditions, in order to establish a cause-effect relationship. Finally completing picture using registry is essential, as the registry document the absolute frequency of the problem and averages out surgeon and patient influences.

Taper corrosion is, at the present time, only indirectly documented by the registries and there is no direct registry data on different taper designs. It should be remembered that the aetiology and significance of each of the influencing factors is not yet fully understood. This is especially true in revision cases, which have already had taper problems3. Nevertheless, clinical case series, registries, retrieval and laboratory studies allow us to develop some pragmatic mechanical guidelines, to reduce the incidence of taper problems.

These are:
1. Tapers are designed for torsional, not bending loading. High offset stems, long heads, large heads, high friction in the joint, high loading in the patient, and especially modular necks and stems should be used with care.

2. Reducing the bending load at the taper interface is the most effective and immediate method to reduce the frequency of taper problems.

4. Taper surface morphology, the mismatch in taper angles between female and male components, in combination with the assembly force, are important, even if they are poorly understood factors.

5. There has never been a standard specified for taper dimension. As a consequence, tapers vary between, and even within, manufacturers.

6. Proper assembly without contamination is important. In summary, modular interfaces require appropriate assembly and loading. Each additional modular interfaces can potentially cause problems. Thus the risks of modularity have to be weighed against the clinical benefits. 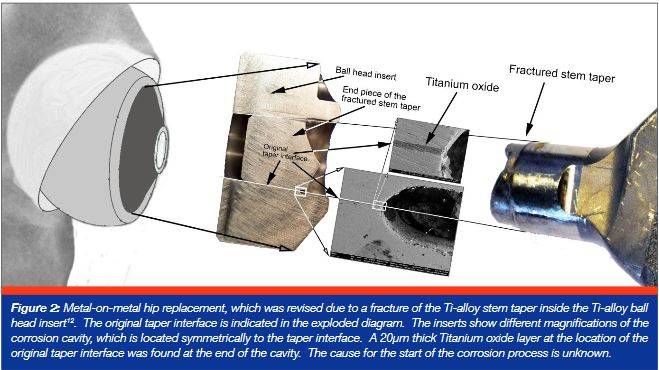 Professor Morlock is Director of the Institute of Biomechanics at the Hamburg University of Technology in Hamburg, Germany. He is a member of the “Working group on metal-on-metal implants” of SCENIHR of the European Commission and of the Executive Committee of the German Arthroplasty Register EPRD. His major research interests are in pre-clinical testing, failure analysis, biomaterials in orthopaedics, and the interaction between implants and the human body.
You must log in or register to reply here.