These are the symptoms of meralgia paresthetica:
They commonly occur only on one side of your body and may intensify after walking or standing.


In most people, this nerve passes through the groin to the upper thigh without trouble. But in meralgia paresthetica, the lateral femoral cutaneous nerve becomes trapped — often under the inguinal ligament, which runs along your groin from your abdomen to your upper thigh. 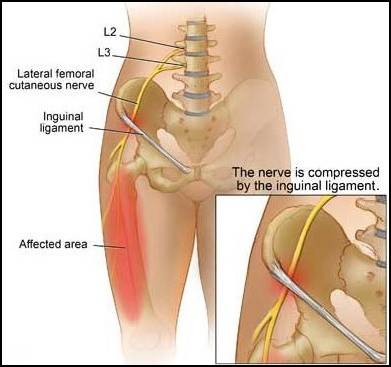 Treatment for meralgia paresthetica focuses on relieving compression of the nerve.

Surgery
Rarely, surgery is considered to decompress the nerve which means snipping the inguinal ligament. Only recommended in cases of severe and long-lasting symptoms.

1. use of retracting instruments during anterior or lateral approaches
2. body weight applied on the non-operative side
3. table fitments used to support the patient on their side during lateral or posterior approaches. This could also be the use of sandbags, special pillows or other operating table attachments.

This is a popular type of support pillow. It starts off as a bean bag which is placed under the patient, then the air is suctioned out at which point it becomes solid. There are smaller pillows which, if placed incorrectly, can apply the kind of pressure being discussed.


Meralgia paresthetica after total hip arthroplasty in supine position
(medical article)
MP is a entrapment neuropathy often caused by compression of the lateral femoral cutaneous nerve (LFCN) as it travels along the posterolateral aspect of the psoas major muscle, crossing between the anterior superior iliac spine (ASIS) and the inguinal ligament, before entering the thigh. It is frequently related to iliac bone graft harvesting, but MP can occur as a transient compression neuropathy and only a few cases are reported in the literature related to prone and lateral positions during surgery. It was possibly caused by the pelvic bolster or support placed on the left side during surgery in supine position to avoid movement on the operating table.

The patient underwent THA in the right lateral position. A bean-bag positioner was used which is typically evacuated of air with suction to render it hard. Total hip arthroplasty was performed using a direct lateral approach. Intraoperative surgical time was 2.5 hours, and total anesthesia time was 3.5 hours.

A few days postoperatively, the patient began to experience “burning and shooting” pain in the non-surgical hip, but she did not report this pain until 6 weeks postoperatively. She was treated initially with a single lidocaine injection. When this proved ineffective, she was treated with topiramate (100 mg daily) and vitamin B6 (100 mg orally twice daily).

The symptoms lessened markedly at 5 months and had resolved completely at 9 months postoperatively.
You must log in or register to reply here.