INTRODUCTION: Leg length discrepancy (LLD) following total hip arthroplasty (THA) remains common and can be a source of patient dissatisfaction and distress. In an effort to reduce this occurrence, surgeons undertake pre-operative templating and use various forms of intra-operative measurements, including computer navigation. With the advent of better technologies to measure intra operative leg length the “gold standard” with which to compare them is vital. This study aims to delineate how best to measure LLD form a pelvic radiograph and quantifies the errors.

METHODS: Three observers took a total of 9,600 measurements from 100 pelvic radiographs. Four lines were constructed on each of the radiographs, bisecting the acetabular teardrops (Line A- Methods 1/2), ischial spines (Line B- Method 3/4), inferior sacroiliac joint (Line C- Method 5/6) and inferior obturator foramen (Line D-Method 7/8). Measurements were taken from these lines to the midpoint on the lesser trochanter and to the tip of the greater trochanter. The effect of pelvic positioning was also assessed using radiographs of a synthetic pelvis and femur using the same eight methods by a single observer. Intra-observer variability was analysed using within subject standard deviation. Inter-observer variability was analysed using the coefficient of inter-observer variability (CIV).

DISCUSSION AND CONCLUSION: Measuring from the inferior aspect of the ischial tuberosities and to the midpoint of the lesser trochanters is the most reproducible method for measuring LLD from a pelvic radiograph. This method is also the least affected by pelvic positioning. The errors in measurements from pelvic radiographs can be high especially when there is patient mal-positioning. This information should be considered when using this method as the “gold standard” with which to compare intra-operative measurement techniques. 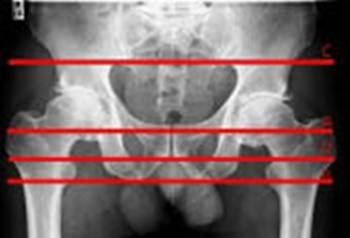