Even patients with equally long legs after a total hip replacement may perceive their operated leg as longer immediately after the operation. The patient may feel that one leg, usually the not operated leg, is shorter, although both legs are equally long as the measurement on the X-ray will confirm. The patients complain of a sense of imbalance and they feel that one leg is longer. They may also have pain around the operated hip joint, in the groin, and/or in the lower back. But the pain may occur also in the opposite hip, especially if there is osteoarthritic damage of this hip apparent on X-ray pictures.

There are two types of LLD, apparent and real.

Apparent LLD occurs because, before surgery, the patient has been compensating for their hip pain by tilting the pelvis to put more weight on their good leg. An activity like this becomes a learned posture and can become entrenched in the patient's mind and/or body. Actually both legs are the same length and over a period of a few months, this posture will correct itself or can be helped to correct itself with the guidance of a knowledgeable PT.

Real LLD is caused by possibilities that
1. the spine has a mild curvature
2. the prosthesis is misplaced.

If the prosthesis is misplaced, it could be either that the femoral component neck is too long or too short or the stem has not been placed in the femur at the correct level. These situations can only be corrected by revision.

Measuring LLD requires appropriate knowledge and skill. The measurements should be taken from one bony point on the pelvis (the superior anterior iliac spine) and another at the ankle (the medial malleolus).
This is the only measurement that is always accurate. 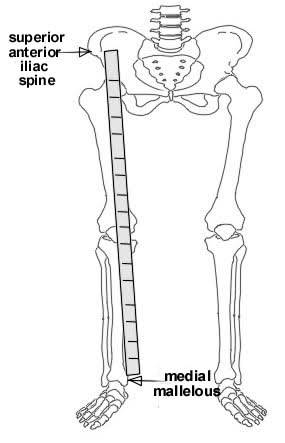 Incorrect methods of assessment
But too often, a PT and sometimes even a doctor, will measure in other ways as shown below which are unlikely to give totally accurate results:

1. Comparing at the ankles with the patient lying down 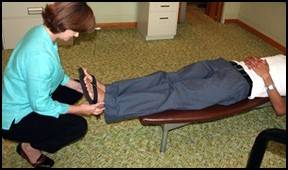 2. Measuring from the groin to the floor

Rest assured that by far the majority are apparent LLD and will settle in time. You should not be overly worried about it..
You must log in or register to reply here.