Olá de Portugal! I have been a member for some time but this is my first post.

Firstly, I had a total hip replacement, left anterior non-cemented following a fall breaking my femur at the neck (Garden 4). After 6 weeks non weight bearing and 18 physio sessions I was back to normal.

After several years of a dodgy knee and a twist and fall in October, an MRI in December revealed patellafemoral subluxation, chondromalacia and muscle atrophy in the left knee. Doing physio ttherapy I progressed to hip flexor exercises and I experienced severe pain in my left thigh from just above my knee to the hip externally. I saw an Orthopedic specialist last Friday and he said my hip was causing all the problems. My hip has never bothered me! He took an x-ray and said to take it to the surgeon who did my hip replacement (whom he knows). He prescribed Tramadol 37.5/Paracetamol 325 twice daily for pain. I have edema in left thigh. My last hip x-ray and exam was February 2016. What does the x-ray show? My appointment is not for another two weeks.

I am in great discomfort and cannot put any pressure on my left leg, hence I cannot walk!

Any comments welcomed and thank you in advance. 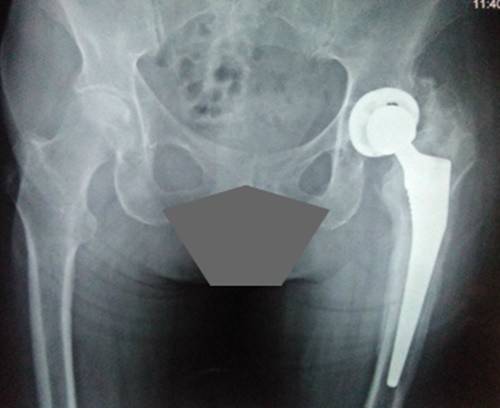 Hi @Izabel so sorry that you are suffering but glad that you have an appointment booked with your OS. I have tagged @Josephine in as she will be able to give you advice. She may have additional questions for you but she will want to know the date of your replacement. I hope you soon have some answers and your pain eases

Thank you for your comment @Jackie222. I forgot to put my replacement was 17 December 2014!

Hope you get this sorted soon, must be very hard for youxxx

Hi @Izabel
I'm so sorry for your pain, worries and concern.
Prayers for your comfort and peace of mind as you await your appt.
Hope you are able to rest comfortably in the interim.
Hugs

clodaghcov and Layla Thank you both for your kind words. They are much appreciated.

Izabel said:
I experienced severe pain in my left thigh from just above my knee to the hip externally. I saw an Orthopedic specialist last Friday and he said my hip was causing all the problems.What does the x-ray show?
Click to expand...

Izabel, I am so sorry to have to tell you this but your stem is loose! I can't tell about the cup because I went and edited your picture to privatise it and never failed to save the original! Can you send it to me again?
OP
OP

I know it is knee as opposed to hip, but as there appears to be a connection I will continue here.

I stopped my physio therapy on 23 January following the pain experienced doing hip flexor exercises, which I seem to still have with any slight movement. I am basically bedridden as it is too painful to get in and out of bed to the wheelchair and into the lounge and into and out of a chair. It is extremely painful pulling my leg up from a stretched position. It is unbearable to lie on my sides.

My question is this ... should I be doing something positive action-wise? I constantly do my muscle exercises ... stretching, quad and glute scrunches and calf tightening to build up my muscles.

Hopefully this will also be resolved when I see my original surgeon.

Thank you again for reading and any advice gratefully accepted.

Thanks for the new image, Izabel. I am happy to report that your cup appears to be sound.

Izabel said:
My question is this ... should I be doing something positive action-wise? I constantly do my muscle exercises ... stretching, quad and glute scrunches and calf tightening to build up my muscles.
Click to expand...

My response is this: Hips actually don't need any exercise to get better. They do a pretty good job of it all on their own if given half a chance. Trouble is, people don't give them a chance and end up with all sorts of aches and pains and sore spots. All they need is the best therapy which is walking and even then not to excess.
OP
OP

Thank you again for your quick and helpful response @Josephine. A positive note but I guess I still have a revision to look forward to!

Regarding the exercises I was actually referring to my painful shifted kneecap and uneven padding underneath building up my atrophied muscles above and below the knees, probably caused by a 50lb weight loss over the past couple of years and a sedentary lifestyle.

Update. Saw my original surgeon, privately as he consults at a private hospital although he is Director/Head Surgeon of an SNS/NHS hospital. He examined knee but said hip was priority as he suspects femur is split at rear. Asked if we had insurance and when we said no (we have money for private) on a piece of A4 he scribbled a note for husband to take to SNS hospital next morning.

He met husband at hospital and arranged pre-op bloods, x-ray and CAT for 12 March and Anaethetist consultation on the 14th. Now await revision op date. This will now be free as original. Not looking forward to this but will be pleased to be pain free and mobile again.

Then have to re-arrange breast cancer yearly follow up which has been cancelled this month (bloods mammogram, ulttrasound, physical exam and consultation) due to immobility issues.

Oh Izabel. Glad you still make lemonade...let's hope this is the last lemons you have to squeeze

I know you hate that this was problem but you KNEW things weren't right.
We will be watching you with support and rooting for you.

@Izabel at least you are moving forward with this. Please keep us updated!
OP
OP

It can only happen to me! On the way to my pre-ops on 12 March we were involved in a car accident!!! Three hospitals and 3 weeks later I was released on 3 April having had a total knee replacement on 29 March! First hospital ER from accident, second contracted MRSA, third went private.

Femur fracture is healing on its own but there are other issues ... CAT report states ...

"In the present study, we observed osteosynthesis material in the left hip joint, with the presence of an anterior parietal fracture of the left acetabulum with a dislocation of an anterior bone fragment measuring 44mm in diameter.

There is also a fracture at the level of the left greater trochanter with some bone fragments present, about three, the largest measures 35mm with a spacing of about 7mm. There is coexisting thickening of the spinal cord markedly hyperdense in this topography, with a thickening of 18mm, which may be related to hemarthrosis.

Atrophy of the muscular planes of the middle and lower trough to the left.

There are no alterations at the level of distal stem part."

Surgeon said walking was priority so knee op first. Hip op was a walk in the park from knee op. I am in almost constant pain and putting pressure on my leg is agony. Have staples (27) out on the 17th when I see surgeon for followup. Knee is swollen and bruised. Thigh is twice its normal size. Can only lie on back so coccyx bone hurts! Surgeon thinks hip revision in November perhaps.

I feel like I am malingering and have lost all positivity, but ....

Oh my stars! I am so terribly sorry for how much you've been through this last month. I certainly can't discern all the medical jargon from most recent report, but I'm certain @Josephine shall be able to.
Hoping that knee heals quickly so the rest can be attended to.
Sending healing hugs your way.

Aww, Izabel...I'm so very sorry. It's unimanaginable all you've been through, you poor dear.
It would be very difficult to remain positive in light of all you've shared. But where there's breath, there is hope. As disheartening as these set backs are, you can triumph, thankfully. Please continue stopping by with updates so we can encourage you through the process. Don't lose sight of a day in the future when all of this will be behind you. Prayers that day comes quickly.
Love and hugs as you move forward.

Osteosynthesis is a technical term for the products of bone healing.

Izabel said:
an anterior parietal fracture of the left acetabulum with a dislocation of an anterior bone fragment
Click to expand...

'parietal' indicates the roof of the acetabulum

Izabel said:
also a fracture at the level of the left greater trochanter with some bone fragments present
Click to expand...

Most likely a side impact which has caused various chips off the greater trochanter which is inconsequential.

Izabel said:
There is coexisting thickening of the spinal cord markedly hyperdense in this topography, with a thickening of 18mm, which may be related to hemarthrosis.
Click to expand...

This can happen if there's been an intraspinal hematoma in that area.

@Izabel - You are due for some good karma... Without being super articulate the thought that came to my mind when reading your thread is "that really sucks..."... Wish I had better words ... Hopefully you'll look back on this time as a short bump in the highway of life... Hang in there...

Oh no how awful for you I’m so sorry. Hopefully using ice on your knee will help with the swelling and pain. I hope your recovery progresses well