hmm - thought I'd started a new thread for this but it appears not.

So I'll start the saga again. You all might remember that I had a revision for a loose tibial implant back in Sept 6th. I wasn't too frazzled as I reckoned I'd already had two TKRs so how bad could it be! WRONG! Turned out a larger knee was put in that used devices with 10cm (femoral) and 12cm (tibial) long stems! More on that later.

Surgery took 4½ hours which I was NOT expecting. Just as well they gave me three different blocks (at least the anaesthetist was well prepared!) so my pain was well controlled for the first 48hrs.

I got home on the 8th and was taken into my house in a wheelchair by two very kind ambulance men! Was I glad I'd rented a recliner armchair though! It made all the difference.

I'll skip over the next 3-4 weeks except to say that I wasn't eating anything at all.

By week 4 I was walking about the house, feeding the cats and making small meals (very small meals!) and it was all a nightmare. The carer came every morning and saw me upstairs to the shower, standing by in case I needed help which I didn't but I was grateful for her presence never the less.

At six weeks, I had to attend a follow-up appointment and took a taxi to the hospital. Best 'oops' about that was when the driver got me a wheelchair and then found he needed to wheel me around his car, not noticing there was a gutter drain in the way. One front wheel went into it and I was nearly tossed out of the chair! Luckily I was able to slam my hands on his car bonnet to save myself!

Thereafter I was able to walk around the clinic using just my walking stick but every person of my past acquaintance I passed, almost immediately remarked that I looked as "white a sheet" and when Sean (surgeon) said it too, I was finally concerned. Anyway, by this point I was feeling pretty wiped out and when I found the staff in the 'blood room' were out to lunch, I gave up and got a taxi home, planning to get the tests done at my GP surgery later.

But it was during this appointment, when he finally let me see my xrays, I realised how looong both implants were.

This also explained why I was having such a lot of pain in my left ankle! Sean apologised, saying that was probably his fault as he been 'pretty rough' with the ankle whilst trying to get the implants in! It's still hurting to this day!

Anyway, it's been 8 weeks this day and I am mobile without any aids and gradually getting back to a normal diet. Oh, and the blood tests were all normal which was a relief. I only started driving out to the shops last week but I still use the store's scooter as I am unable to walk about too much yet.

So that's a synopsyse of my recovery. Not sure if this heralds my return to the forum, I don't think I'm quite up to that yet.
OP
OP

You've all been so kind in your messages. Life hasn't been too kind to me of late and it didn't help that my computer took a serious nose dive and I was off line since before the op! It was a bit good and a bit bad - it really didn't take me long to get used to not having it! It came back today - my repair man told me I'd had a 'serious' amount of malicious malware and it took him sometime to rectify it. Even now it's still sticking when I click on a key.

As for the surgery, I'm told it was a 3½ hour op and I had 8" stems above and below the joint. So needless to say, my first task was to come on here and get posting! But now I find that things are still not back to normal and several keys still stick.Time for a new computer,I think!

PS, saw the surgeon a few days ago and he referred to my ROM as "outstanding"! I think it's about 140/-2but nobody's actually measured it as yet.

@Josephine Welcome back! So lovely to see a post from you! We have all been very worried. Sounds like your op went well but your computer is terminal! Time for some new technology!

Welcome back, Josephine! It's so nice to see you back and to know you're doing so well! You have been missed. I agree-it sounds like time for a new computer.

Hi, Jo!! How wonderful to hear from you. Hope you're computer shopping today so you can get that part of your life back to normal.

Your recovery sounds outstanding. I'm so happy to hear that.

Josephine,
Wonderful to hear from you, and see you posting even with sticky keys.
Wishing you continued healing!
L

Thank you for all you have done on this forum for so many of us. Personally, your common sense and informative attitude has been a godsend

Sending more healing vibes for you and your computer. Glad to see you are back on line. Take care.

It sounds like all is going well with your recovery. Great news!
Too bad you can't say the same for your computer that's obviously seen better days.
Best wishes!

So glad the op was good & your ROM is good. Lovely to see you back... hope Life and the Computer is good to you from now on!!

So nice to hear from you, Jo!

8” stems, wow! And a fabulous ROM! Your ROM knew better than to not cooperate with you.

Best wishes for continued healing. We miss you.

Sure is good to see you posting. Maybe your computer needs a good revisionist?

Glad to hear you are doing well knee-wise.
Hope you are comfortable and hoping things keep getting better and better.

Glad your revision went so well. Now for that computer... it’s probably time to upgrade that soon.

@Josephine, what great news about your revision!!! If you are getting a 140 ROM that is outstanding!!!
We have missed you and your postings/updates. I hope you invest in a new computer......you deserve it!

Josephine so happy to hear your surgery was a success!

Jo, I hope you are continuing to do well. With all your experience you know the best way to recover.

We sure do miss you.

Hi Josephine, sorry to hear this recovery has you in a slight detour, but hope in time it will be sorted out. You are missed!
Having computer issues is never fun. I have one key that can stick and had it “fixed” twice now. Fortunately its a shift key, so I am learning to shift on the other side. I do not think it will ever work properly, so I am not bothering with another “fix.”
Several keys sticking sounds very frustrating!
I hope all will be resolved soon for you.
L

So glad to hear that everything seems to be going well with your recovery. We've missed you. That's an amazing ROM you have in such a short time. I'm impressed! Good luck with the rest of your recovery and I hope you get your computer sorted soon. Take care.

Hi, Jo, it’s so good to hear from you! We’ve all been waiting, we’ve missed you.

I’ve seen pictures of those long stems, and oh my!

Very interesting about the cause of your ankle pain. I’m sure there’s much done to us in the course of the surgery that would explain a lot if we knew about it.

I’m sorry about the rough spots, but glad you are now 8 weeks along into your recovery.

I will leave you our Recovery Guidelines. Each article is short but very informative. Following these guidelines will help you have a less painful recovery.

Knee Recovery: The Guidelines
1. Don’t worry: Your body will heal all by itself. Relax, let it, don't try and hurry it, don’t worry about any symptoms now, they are almost certainly temporary
2. Control discomfort:

rest​
elevate​
ice​
take your pain meds by prescription schedule (not when pain starts!)​
don't overwork.​
3. Do what you want to do BUT

​
a. If it hurts, don't do it and don't allow anyone - especially a physical therapist - to do it to you​
b. If your leg swells more or gets stiffer in the 24 hours after doing it, don't do it again.​

4. PT or exercise can be useful BUT take note of these

​
the BoneSmart view on exercise​
BoneSmart philosophy for sensible post op therapy​
5. At week 4 and after you should follow this

​
Oral And Intravenous Pain Medications​
Wound Closure​
The Recovery articles:
The importance of managing pain after a TKR and the pain chart
Swollen and stiff knee: what causes it?
Energy drain for TKRs
Elevation is the key
Ice to control pain and swelling
Heel slides and how to do them properly
Chart representation of TKR recovery
Healing: how long does it take?

Post op blues is a reality - be prepared for it
Sleep deprivation is pretty much inevitable - but what causes it?

While members may create as many threads as they like in the majority of BoneSmart’s forums, we ask that each member have only One Recovery Thread. This policy makes it easier to go back and review the member’s history before providing advice, so please post any updates or questions you have right here in this thread.

nice one Jockette, the irony is not lost, I wish I'd seen it first...!

PS I know about those long stems too... 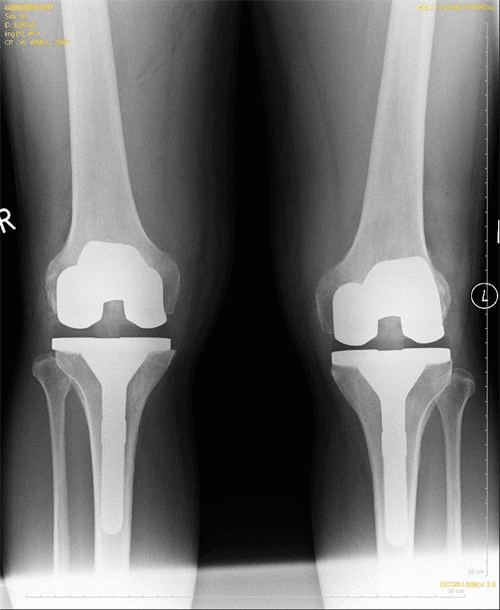