Experiencing pain in the groin could be iliospoas syndrome or more rarely an iliopsoas bursa.
It would be a nagging pain or a "burning" feeling. It may not hurt as much when walking.
It can be made worse when bringing the knee up to the body or it could ease it.

It arises from a massive muscle coming down from several points on the spine which come together to a point at the top end of the femur on the inner side where it is attached to the bone. Under the attachment is a bursa called the iliopsoas bursa which is situated right in the groin. 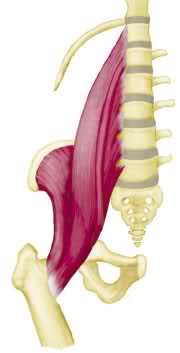 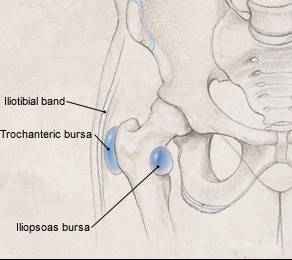 ​
First level treatment is a combination of medication, ice (application of ice for 20 minutes every 1-2 hours for the first 1-3 days is recommended), rest, and gentle stretching. This is essential to prevent the condition becoming chronic and difficult to manage.

Also pain killers of your choice (IOW whatever works!). Paracetamol (also known as acetaminophen or Tylenol) 1,000mg 3-4 times a day is recommended.

In addition to relative rest (avoidance of activities that stress the iliopsoas muscle), a gentle stretching regimen can assist in reduction of spasm in the iliopsoas complex. Note that stretching must not immediately follow icing, when the sensitivity to pain is lessened, because a potential to overstretch exists. A gentle stretch for the iliopsoas muscle is demonstrated in the image below. Hold the stretch for a count of 20 seconds, relax for 30 seconds, and repeat the stretch 5 times. Caution patients to not hold their breath while maintaining a pain-free stretch. 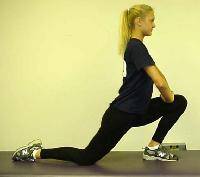 Certain stretches can allow an anteriorly over-rotated pelvis to return to a more anatomical position. Stretching the rectus femoris (see the image below) promotes a neutral pelvic position and diminishes strain or spasm of the iliopsoas muscles. Instruct patients to hold the stretch as instructed in the Acute Phase of physical therapy. 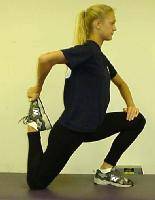 In addition to stretching for return of normal pelvic alignment, strengthening the hamstrings provides a posterior force on the pelvic girdle and combats the stress of the iliopsoas pull on the anterior pelvis (see the images below). Iliopsoas muscle injury can cause lumbar lordosis and anterior pelvic tilt, both of which can be corrected by strengthening specific counteracting muscle groups. 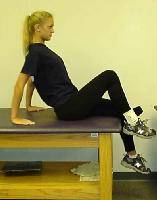 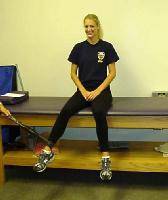 Strengthening the abdominal musculature by performing sit-ups addresses both issues. Sit-ups performed by hooking ankles under an object or having them held fast can aggravate the lumbar lordosis and iliopsoas strain. Sit-ups or crunches executed with knees and hips flexed at 90° allows the iliopsoas to relax, with the effort concentrated on the rectus abdominis muscle, and preserves a neutral pelvic position (see the first image below). Exercises that strengthen the gluteus maximus also augment the ideal pelvic status (see the second image below). 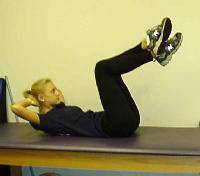 Sit-ups with hips and knees in 90° of flexion.

Begin all strengthening exercises at a weight that the patient can comfortably lift or with an elastic band resistive device with which the patient controls the tension. Exercises should be pain-free and performed daily in 4 sets of 10-15 repetitions. As the weight becomes easier to lift, increase the resistance.

Endurance is gained through movement with low resistance over time. Exercises requiring repeated hip flexion or femoral external rotation can improve iliopsoas function if resistance is low. Examples of these exercises are cycling with low resistance, stair climbing on a machine with the setting on the lowest resistance, or walking. The workout should not produce pain but could fatigue the iliopsoas muscle. Use caution so that the musculature has time to recuperate prior to the next bout of endurance training. As the muscle recovers, endurance exercises can be performed daily, and resistance gradually can be increased with time of activity.

C Mac said:
I am always curious as to how one gets a massage of the psoas -- isn't that located under all the organs in the belly and not accessible?
Click to expand...

This is true, the psoas is a giant muscle arising from the lower thoracic and lumbar vertebrae and running down into the top of the femur. A good chiropractor or massage therapist is well able to treat the psoas within the abdomen by having the patient lay on the table, with the knees flexed, and can then apply acupressure to the body of the muscle through the abdominal wall.
OP
OP

After total hip arthroplasty, it is often difficult to diagnose and treat patients with persistent groin pain when the components appear to be well fixed on the radiograph and when there is no clear cause of the pain. Anterior iliopsoas impingement and tendinitis is a poorly understood and likely under-recognized cause of groin pain and functional disability after total hip arthroplasty. The patient history and physical examination findings are usually only suggestive and the symptoms frequently subtle. It can occur in patients with no malalignment or anterior prominence of the acetabular component.

The diagnosis may be confirmed by one or more imaging studies in combination with a confirmatory diagnostic injection. Nonsurgical management may not resolve the problem. Surgical treatment, consisting of release or resection of the iliopsoas tendon, alone or in combination with acetabular revision for an anterior overhanging component, usually provides permanent pain relief.

When conservative measures fail, treatment can consist of a psoas tenotomy or a revision arthroplasty. When there is no obvious cause such as malpositioning for component impingement, psoas release reliably improves pain and function. This procedure is mostly performed through an open approach, which can give significant complications.

A forty-year-old woman presented with groin pain on the right side, exacerbated by long periods of sitting, that developed six months after a right total hip arthroplasty for osteoarthritis, which had been performed sixteen months prior to presentation. The patient also had previously had a left total hip arthroplasty, which was asymptomatic.

On clinical examination of the right hip, the patient demonstrated a Trendelenburg gait. There was no evidence of infection or abductor insufficiency. Active straight leg raise was painful and reproduced the groin pain. With external rotation of the hip and simultaneous hip extension, the patient had reproducible pain but no audible or palpable snapping. Leg lengths were symmetric.

There was no evidence that the joint centre was too distal, which could cause a lengthening of the iliopsoas tendon. In addition, the prosthetic femoral head was smaller than the patient’s native femoral head. Radiographs and computed tomography revealed no evidence of component loosening or of a prominent acetabular component that could contribute to iliopsoas tendon impingement.

Transiently, the patient had dramatic relief of the pain for three days after a fluoroscopic-guided iliopsoas bursal injection of steroids and local anaesthetic. A trial of physical therapy did not provide relief of the groin pain.

Because of the patient’s recalcitrant groin pain and the transient relief provided by the injection, the patient agreed to an arthroscopic iliopsoas tenotomy. The procedure, was performed via a portal created below and anterior to the greater trochanter. Under arthroscopic guidance, a cannulated system was passed into the iliopsoas bursa adjacent to the lesser trochanter. The bursa was insufflated. An other portal was established via a second incision and the iliopsoas tendon was completely divided from its attachment to the lesser trochanter