THR I Have a Winner.

You’re on your way! You’ve chosen a reputable surgeon in a renowned hospital. You’ll be in good hands and a week from now already home and healing!

Thanks for your support

and your positive outlook about envisioning a pain free future. I forget to focus on that for some reason. Just worried about something going wrong. And the pain during recovery.

Mersada said:
Just worried about something going wrong. And the pain during recovery.
Click to expand...

Remember 2 things - your surgeon and his team do this procedure every day, several times per day. It's their day job and they are experts. Nothing will go wrong.

And - Unlike pre-op pain, post op pain is controlled. Medication, ice and elevation.

You will be fine!
OP
OP

Should I have gotten a metal allergy test? My sister mentioned that to me...I was wondering if it's necessary?

@Mersada Have you ever had trouble with metals? Like getting a rash from wearing metal based jewelry? If not then you probably do not have a metal allergy. And today's implants use ceramics for the cup and head of the implants and usually the metal parts are titanium or some other metal that it is very rare for people to have an allergy to.

My surgeon is top of the line and steeped in research. I had no metal allergy test.

As far as I can tell, that's the consensus view that there are no accurate metal allergy tests that predict bad responses to the implants.

And you're not getting the metal-on-metal implants that have historically, in my understanding, led to some problems. My sense (not a doctor) is that allergies to the current devices are extremely rare.

@Mersada, you are going to the premier orthopedic surgery institution in the nation, a place famous for having the lowest number of infections after joint replacement of any place in the country. They would be on top of all these kinds of issues. They would lead the nation if such tests were helpful.

I was never tested either. It was never brought up. I wouldn’t worry, Mersada.
OP
OP

Thanks you guys for your input, its reassuring. My own sister is making me nervous. Lol.
I have no reactions to any metal jewelry. I was thinking the same.
OP
OP

Well, I officially started my medical leave from work today. I have tomorrow for last minute chores. Mental health day is what I'm calling it. I have to wait for the hospital to call with my surgery time. This is it. Its finally almost time.

The worst is almost over. That’s the WAIT. Hated that part.
Looks like you have some nice recovery buddies to communicate with here. I took comfort in knowing people were going through it in real time with me. I hope you’re not feeling too anxious. Wishing you a peaceful night and good sleep.

Not too anxious. I will save that for the hospital..lol.
@Layla
Question.. You slept on a recliner for your recovery. Were you able to elevate on the recliner? I think that might be awkward putting a pillow on the foot rest. I have my futon I put 8 inch risers on too. I'm hoping I can sleep on that with it upright so I have the back of it for support.
OP
OP 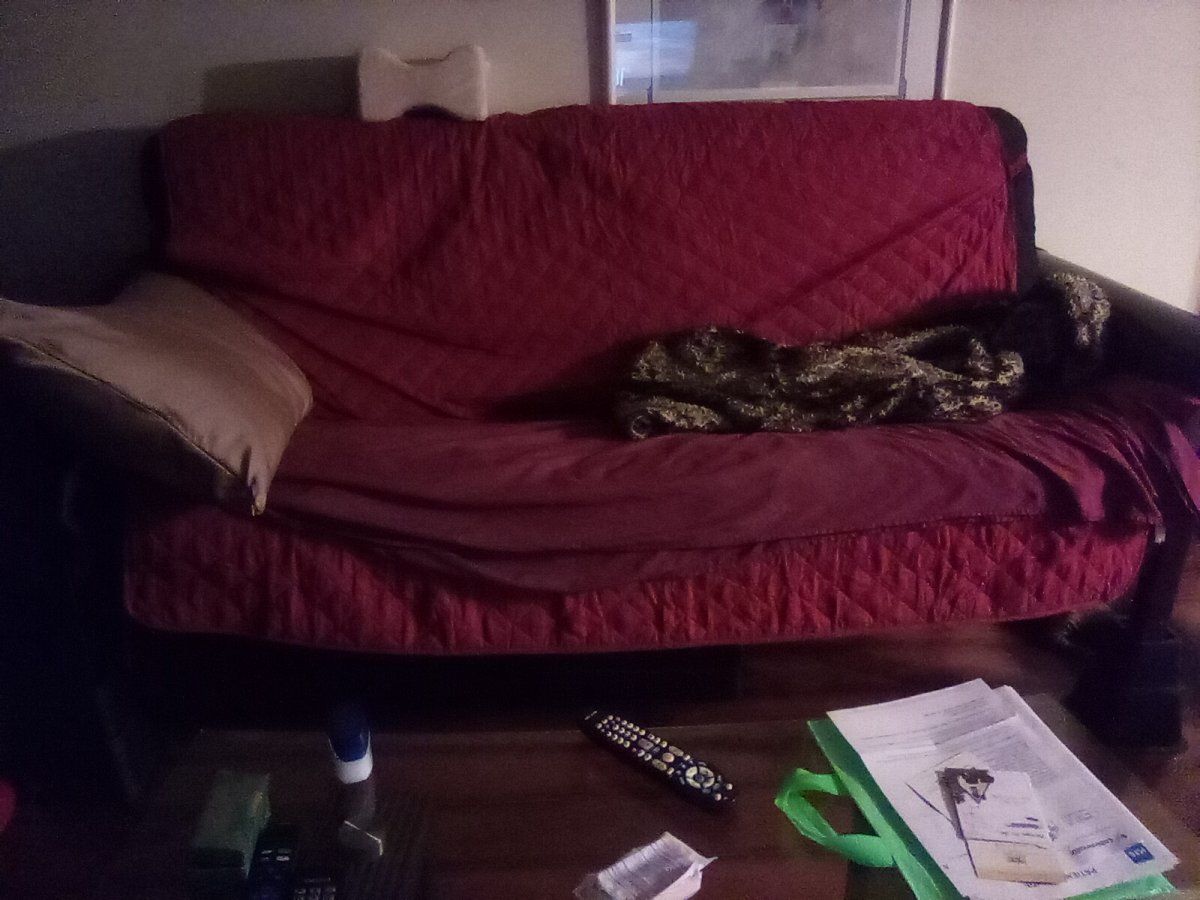 This is what I'm hoping to be able to sleep on.
OP
OP 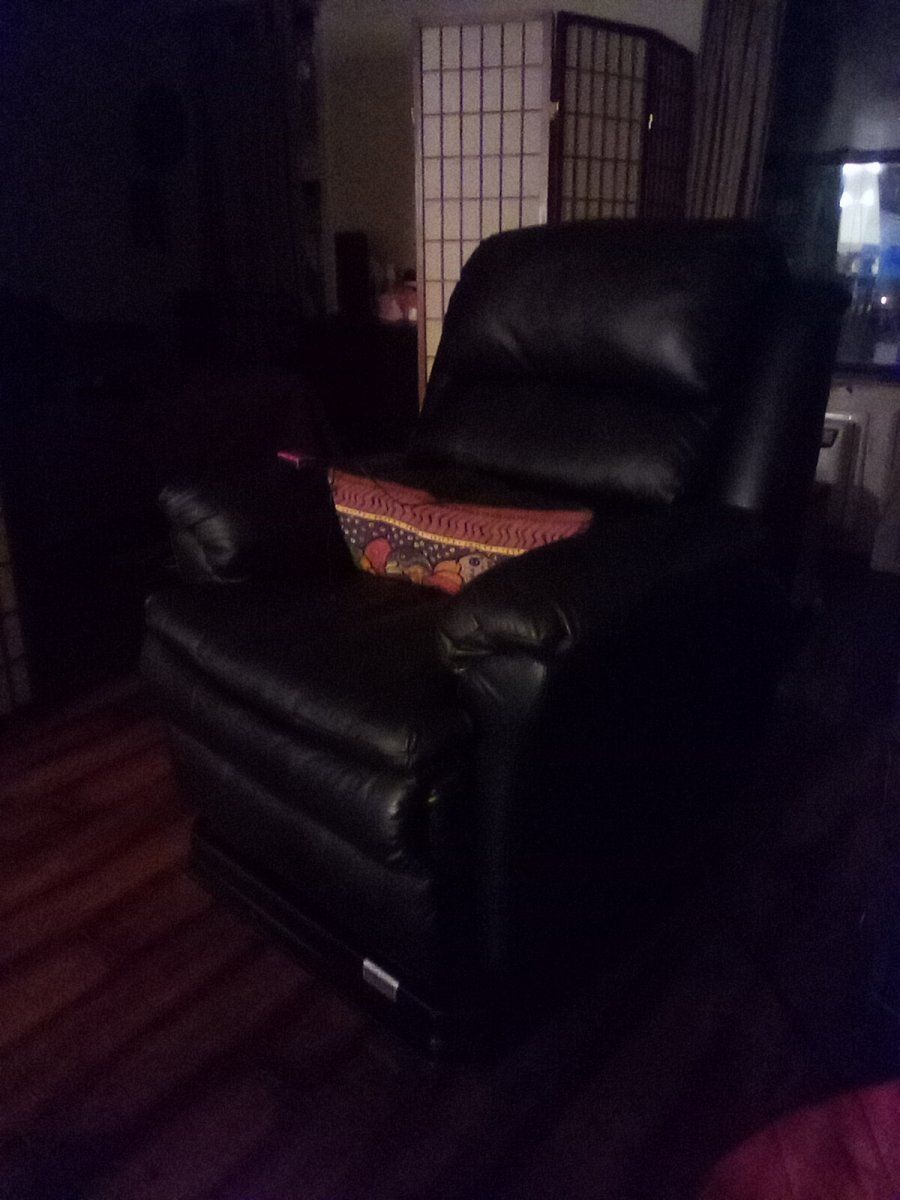 Hi Mersada,
I hate to admit it here, because I advise others to elevate, as we should...but I was not a good patient in regard to elevation. I made sure I walked often enough early on and I iced like a fanatic. I did put a pillow on the foot rest of the recliner during the day, but not really at night. I slept in the recliner for the first three weeks, every night, all night with the exception of a bathroom break halfway through the night.

You may feel more secure in the recliner. You may find you’ll want to put something over it so you’re not slipping around. Mine was upholstered and I stuck a pillow in one side and since my incision was posterior, I had an ice pack wedged in between the arm rest and the side of my thigh (over my incision) It worked well for me and kept it in place. I’d switch it out when I sent to the bathroom during the night.

Try one and if doesn’t work try the other. It’s very common for people to move around
during the night in early recovery, from recliner to bed visa /versa. I’ve read it often here.

It’s nice to hear you’re not too anxious. Good girl!

@Mersada It won’t be long now! I have a recliner that looks very much like yours. I plan on sleeping in it tonight (my first night home) and see how I do.
OP
OP

D —.how is the pain med working?

And I fall in the Layla camp on the elevation part.
You night find it is the opposite but when I did notice swelling in my feet after a few days at home, then I spent some time in the day on the sofa elevating.
Keeping my legs up and ice on while in the recliner seemed to keep my swelling at a minimum.
I am happy you are going to be rid of that hip pain so you can get back to your life. I'm about to hit my 4 year out mark and am still grateful.
I'm sending all the heading vibes I can in advance @Mersada

The clock is ticking...I’m excited for you!

Since your surgery is tomorrow, feel free to start your recovery thread today over on the bright side.

We can leave the Recovery Guidelines there and you’ll be ready to roll once you feel like updating post op. You’ll receive well wishes over there also.
Peace and comfort to you today!
@Mersada

@Mersada Good luck tomorrow! We are very close with our surgery dates, so we can recover together!

@Mersada Your big day is nearly here! All the best tomorrow. It's been a long wait for you but you seem totally prepared. We shall see you on the other side soon. You've got this!
You must log in or register to reply here.