I'm wondering if anyone has tried a course of Hyperbaric Oxygen treatment?

Can it promote faster healing and recovery after surgery, perhaps?

Hello and Welcome to BoneSmart! Thanks for joining us.
Please tell us a bit about yourself. Have you experienced THR? If so, we'd appreciate if you'd share the exact date of your surgery and which hip was replaced. This information is important so those stopping by are able to see with a quick glance how far along you are. Also, If you've had surgery depending how far along you are we have Recovery Guidelines to share. Lastly, we need to make sure you're posting in the right forum while here.

Then...there is the internet where you'll find endless information. Good luck in your search and a great week to you! Hope to learn a little more about you soon.
@Kingsway

I always wanted to try it just to see how much better it would make you feel. I don't doubt it could promote healing but I don't think it's common for any OS to prescribe it and I really don't think most of us would have health insurance that would cover it here in the US. It would be interesting to see if it would. Does NHS or private insurance in the UK cover it or do OS ever prescribe it there? I wonder what the out of pocket cost would be?
M

I've often wished I had access to those professional athletes facilities of whirlpool, hot tub, massage, etc. Bet that would make you feel amazing!
S

A quick google search says HO treatments run $300-600 per session out of pocket. Also seems like several are needed. I was surprised to read that side effects can include inner ear problems, and eye problems

Maybe later I'll look some more to see if there are any studies with joint replacement. I'm wondering just what faster recovery means...months sooner/year or what.
@myglasshalffull A hot soak and a massage would be heaven, wouldn't it? But I wonder how those athletes manage soaking in a tub full of ice cubes? Nope! No way! Brrrr!

Yeah, no ice cubes...although we do love our ice packs!!!
But I'd love a nice hot tub soak.
OP
OP
K

It's 4 weeks since my THR. After a week or so the wound started to drain excessively. My GP prescribed a course of anti biotics, and the wound dried up shortly before I finished them. Since then, the wound was a bit red and itchy. Especially at night, so I would take antihistamines to reduce it enough for me to sleep.

I've since tried a one hour session of Hyperbaric Oxygen Therapy. I was able to go 'down,' to the full 10m depth. With only a little discomfort from my ears.

Basically, you breathe 100% oxygen, while under pressure, which means you are taking into your blood and tissues about 10x the usual amount of oxygen.

That night, the redness and itching were almost completely gone. I also slept better than I had for some time.

I'm guessing the redness and itching might be normal healing. But I was just a bit concerned there might be some infection left.

I'm hoping to have at least one more session with the oxygen. It looks like the going rate is around £40.00 per hour. It looks like you might pay a lot more in the US. 200 to 600 Dollars?!

I want for a large, multi person tank, as I have slight claustrophobia, and didn't fancy being stuffed into a tube! The larger tank also is pressurised with air, not oxygen, so there is much less danger of fire, and so no need to change into a cotton only IE non static, gown.

You wear a mask and demand valve to breathe and to exhaust the oxygen. If I can, I'll add a link to show the tank I used.


My wound AFTER the oxygen session: 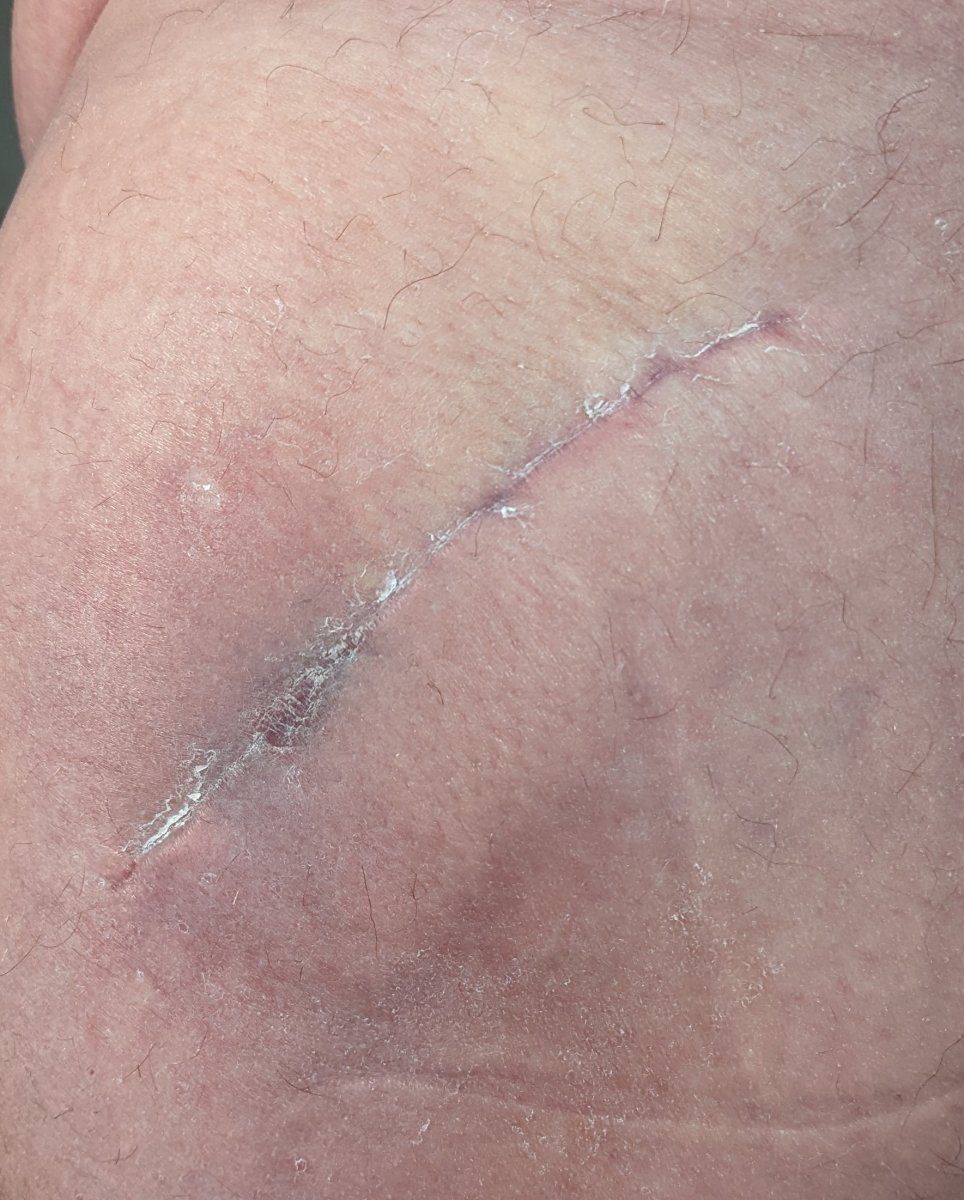 BEFORE the oxygen therapy: 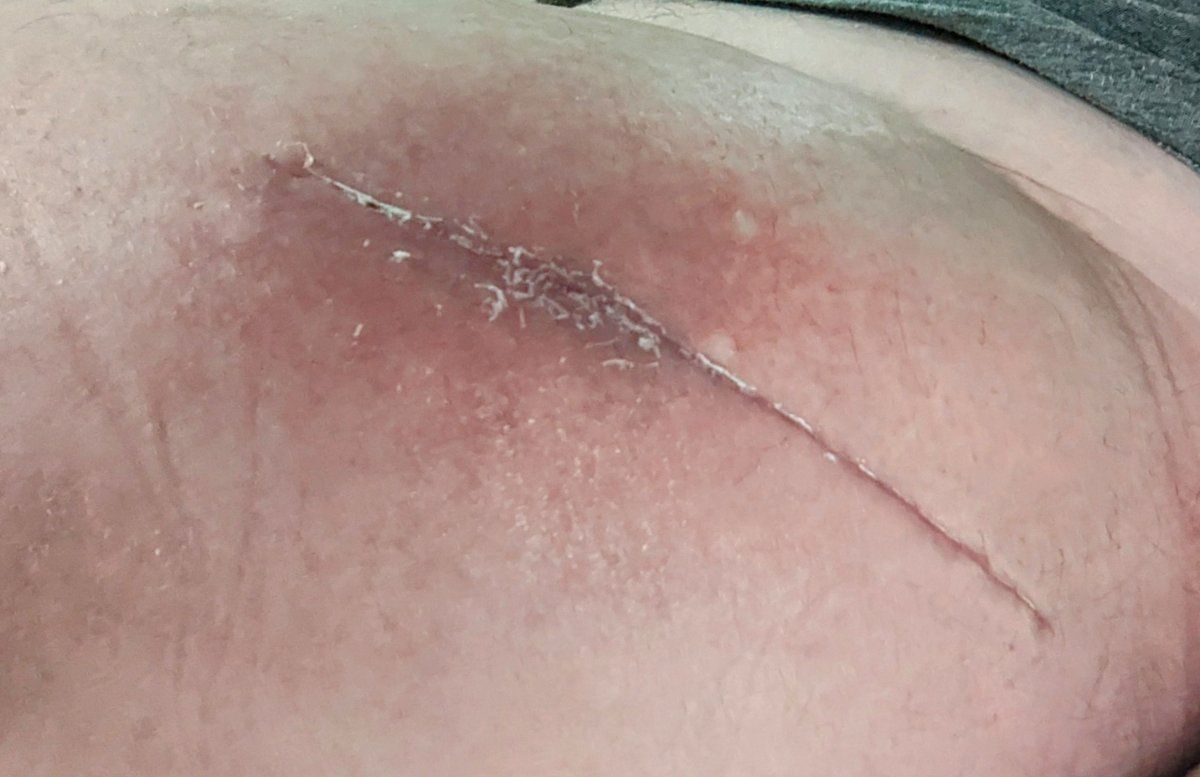 The tank set up: 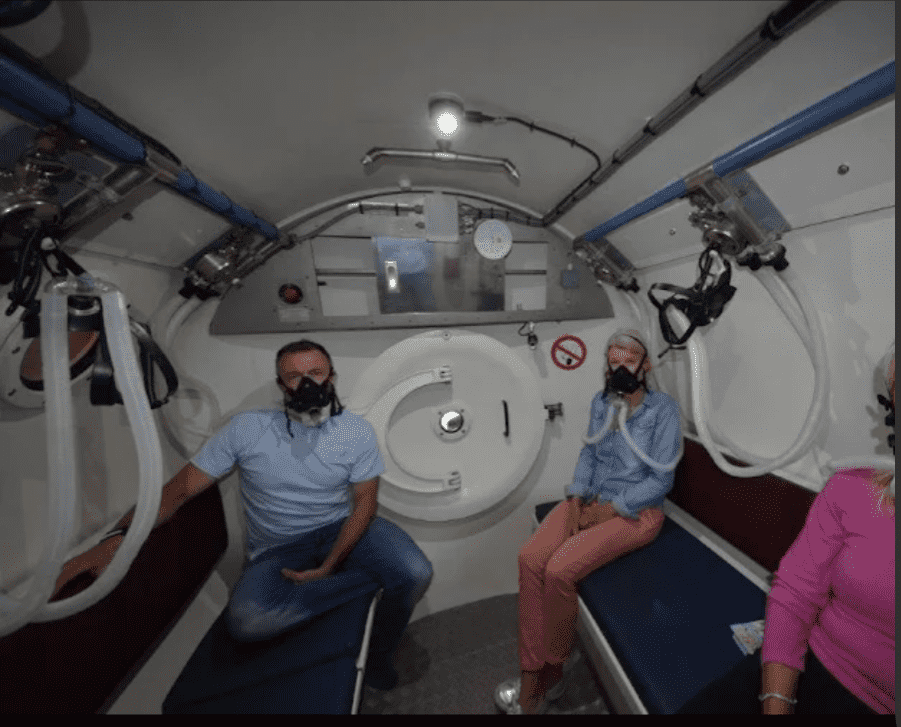 Interesting information about your Hyperbaric treatment. Did they show you how to clear your ears or did they use an ear device that did it for you?

Your incision does show improvement.
B