INTRODUCTION: Metal-on-metal hip arthroplasties (MoMHA) have been shown to fail through a unique macrophage and lymphocytic vasculitis dominated pattern which has been variously described as pseudotumours, adverse reactions to metal debris, etc. The underlying reason for this is often related to excessive metal debris released from the device in most cases. In some patients these reactions are found even in the presence of low metal ion levels, indicating an immune hypersensitivity type of reaction. A histological ALVAL score has been used to differentiate the two types of reactions. Lymphocyte transformation test (LTT) is one means of assessing the sensitivity of a patient to metals although its reliability is clinically unproven.

METHODS: This is a minimum 10-year review of the first 350 consecutive patients (402 hips) who had been treated with MoMHA including all ages and diagnoses. Mean age of the patients is 53 years and mean body mass index (BMI) 26.3. Twenty-five patients (30 hips) died during the 10 years, 23 hips (22 patients) were revised and 12 patients (13 hips) were lost to follow up. A total of 241 patients (277 hips) attended the review and consented to donate blood for the test. Blood was drawn in sodium citrate cuvettes and transported to the laboratory within 24 hours. Testing was performed by a technique called memory lymphocyte immuno-stimulation assay against cobalt, chromium, molybdenum, nickel, titanium and aluminium at two concentrations for each metal.

DISCUSSION AND CONCLUSION: The limitation of this study is the absence of a control group of patients without metal implants. However on comparison of these results to published figures from non-exposed population, it is evident that patients with modern metal-on-metal hip arthroplasty are being sensitized to nickel. Nickel constitutes only a small percentage (<1%) of the cobalt-chrome alloy used in MoMHA and is present only as a contaminant. However the small amounts released from the bearing appear to sensitize a large section of the exposed population. Although the medium term results of MoMHA appear good this sensitization causes concern for the long term survivorship prospects of these bearings. 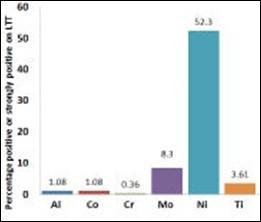