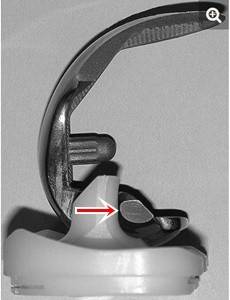 Figure A – On the sagittal view, the apex of the cam is orientated
posteriorly, and the cam has a relatively flat contact surface
against the post in 90° of flexion (arrow).​
Posterior-stabilized (PS) knee prostheses have been used extensively in total knee arthroplasties (TKAs) with excellent long-term results.(1,2) The key feature of these prostheses is the femoral cam and tibial post mechanism that limits posterior displacement and produces femoral rollback. As a mechanical restraint against posterior tibial subluxations, the polyethylene tibial post is susceptible to damage related to impingement, wear, and breakage.(3,4) Tibial post failures, resulting in intermittent pain and instability, have been reported in PS-TKAs.(5-7) We report the case of a patient who presented with acute pain and swelling following a TKA caused by a polyethylene tibial post fracture.

CASE REPORT
A 72-year-old woman with osteoarthritis of both knees underwent a left TKA in March 2005. A standard midline anterior incision with a medial arthrotomy was used to implant a Scorpio PS knee prosthesis. Pre-operatively, the radiographs showed a 4° varus deformity of the right knee and a 7° varus deformity of the left knee. The range of motion of both knees was 5° to 135°. There was weakness of the left thigh flexors (motor grade IV) because the patient suffered from a cerebrovascular accident 10 years earlier. During surgery, an 8mm polyethylene tibial insert was used, which provided good stability in full extension, mid-flexion, and full flexion of the left knee intraoperatively. The patella was not replaced. Postoperatively, the patient recovered well, with knee flexion from 0° to 125° at 6 weeks.

In May 2006, 14 months after the TKA, the patient presented with painful swelling and an effusion of the left knee after slipping and falling. Radiographs showed a vertical fracture of the lateral aspect of the patella and genu recurvatum (Fig. 1). The patellar fracture was treated conservatively. Examination of her left knee revealed genu recurvatum and soft end points on varus and valgus stress testing. Soft tissue and ligamentous injuries were suspected. Magnetic resonance imaging (MRI) was obtained to evaluate an acute ligamentous injury. The MRI demonstrated a loose body fragment in the suprapatellar pouch (Fig. 2). Based on the shape and signal density, the loose body was believed to be a part of the post from the polyethylene tibial insert. Arthroscopy revealed a post fracture as the source of the loose body and a broken polyethylene fragment was found in the suprapatellar pouch. The tibial post was broken at its base with considerable wear of the anterior aspect (Figs. 3 and and 44). 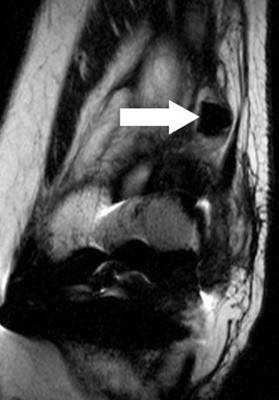 Fig. 2. Coronal fast-spin-echo magnetic resonance
image of the left knee in a patient following
a slip and fall revealed a loose body in the
suprapatellar pouch of the knee consistent in
shape with the tip of the tibial polyethylene post.

Fig. 3. Intraoperative photograph showing a fracture
of the polyethylene tibial post at its base. 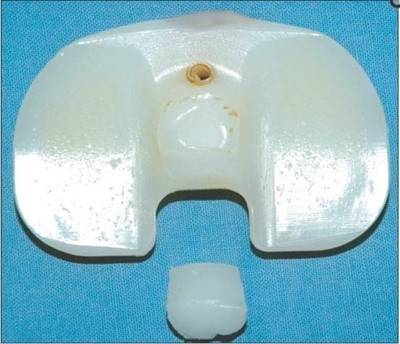 DISCUSSION
The failure mechanism of the post fracture in the present case was anterior impingement with excessive wear over the base of the anterior aspect of the tibial post, which became a stress-riser of post and cam articulation. When the lift-off force overcame the resistance of post integrity, the fracture occurred at the posterior base and propagated anteriorly.(7)

In the present case, a MRI was obtained to evaluate instability when the patient presented with painful swelling and an effusion of the left knee after slipping and falling. A retrospective review of the MRI demonstrated a loose body in the suprapatellar pouch of the knee consistent in shape with the tip of the post. We believe that a high index of suspicion and close scrutiny of low signal density of the tibial polyethylene insert may make the diagnosis possible with MRI.

After the diagnosis has been established in the majority of patients, revision of the polyethylene insert should be considered if the components are well-fixed and in good sagittal and rotational alignment. If the components are loose or malpositioned, complete revision is recommended. Other reports have cautioned that isolated exchange of the polyethylene insert is associated with a high probability of subsequent revision of all components of the total knee.(9,10)

In the present case, polyethylene wear over the anterior aspect of the base of the post occurred only 3 months after a polyethylene exchange during arthroscopy. This finding also resulted from anterior impingement due to a tendency for genu recurvatum. We believe a brace should be considered permanently to prevent genu recurvatum.

Articles from Clinics in Orthopedic Surgery are provided here courtesy of Korean Orthopaedic Association
You must log in or register to reply here.