Gosh, I'm not sure about your question on withdrawal issues.. but it is a possibility. It seems we all hit it around this time frame.
Isn't it nice to have people comment on your recovery? I had several people tell me that I looked younger, too! Haha Probably from standing taller and not stooped over.

You are having such a good recovery and that makes me happy for you! Yours is very similar to my first hip's recovery.

Hey, @Fiona444 , nice to read you had such a positive day planned yesterday. I agree that having things scheduled and events planned often helps with our moods and moving around generally makes me feel better as well. The danger comes when you overdo it and then the excess aching sets in. But sounds like you're doing really well--walking and without a cane, and tackling two flights of stairs--wow, super impressive! Have a great day!

Hello and Happy Friday!
It has to be refreshing to hear people who are relatively unfamiliar to you comment on how well you're doing. I'm sure they noticed you limping along pre-op and now see the vast improvement. I'm so thankful for THR. When you think about it, in the not so distant past, we'd probably end up in wheelchairs before out time. Scary prospect. Thankfully we have our new hips and a second chance. I hope your new hip serves you well for many years to come. Enjoy and have a great weekend!
@Fiona444

@Fiona444 you're doing splendidly! Have to agree about a month ago and all the drama and now it's just pretty much good. Have a great weekend!
OP
OP

Thanks Ladies!
Observations at 4.5 weeks
Only the odd ibuprofen or paracetamol taken for mild stiffness
Minimal structured Pt done due mainly because i get bored counting repetitions. BUT when i do any of the given moves my range of motion has increased massively and stiffness is lessened
I am often forgetting to adhere to my precautions e.g bending to pick something off the floor and once i even crossed my legs! I berate myself as I know how important they are but my point is that i am feeling so normal and my movement is not restricted
I can ALMOST sit in a cross legged position. This revelation appeared while i was doing that clam thing while sitting on the settee and dropping op leg to the side.
I am seeing physio on Monday so it will be interesting to see what she says given that i have not really practiced all the movements in the way she set out but rather just been acting as normally as i can and walking loads.

So happy for you, my hippy happy pal!
Onward and upward

Good grief, @Fiona444 I simply cannot imagine being able to sit cross legged. Clearly, you are doing fabulously well in increasing your range of motion. I mastered bending down fairly quickly, standing and slightly bending non-operated leg and slightly pushing operated leg back, but the sideways motion your describing with a cross legged (almost) position seems wildly improbable at the moment. Like you, I'm only on an extra-strength Tylenol occasionally when I'm feeling really sore and think I need it at night (okay, I did take a Tramadol a few nights ago but that was truly an exception). Daytime stiffness and soreness is manageable, as I know that getting up and moving about is best for easing that. As you are one week ahead of me, I am very encouraged to read your posts about how well you're doing--significant mileage, minimal medication and now, so great, cross legged sitting almost! Hurray for you!
OP
OP

Ha ha, don’t get too excited @Barbaraj it is nowhere near a lotus position

Knees are still quite high but the resemblance is there

. I dont think I could have done anything like a week ago but it is nice as a bit further each week is progress.

It's truly amazing what a difference a day or two makes in hip recovery land in terms of what you can do. It's so strange that one day your body says 'no way' and suddenly the next is 'let's do this!'. I do think that we never know till we try, and you my dear are a real try-er!

Even though it's not a true lotus position, @Fiona444, the fact that you even had the courage and faith to get into a semi-crossed leg position is impressive to me. Great that each week equals more progress--that's what we all are aiming for. Sometimes it is every week, sometimes it might seem like every two weeks, but we're still headed in the right direction which gives me hope. I know you've got your physio appointment tomorrow, and I trust things will go well for you and you get a good report even if you haven't strictly been following instructions. But, you know your body best so you get to do what works for you--and given your positive reports, I think you're absolutely doing fine with your approach. Hurray for you!

I didn't even try sitting cross legged post op until zauberfloate posted a photo of herself doing so.
I believe it was about 18 months after my surgery, obviously never considered it but tried it then and Voila!
While it was a nice surprise that I could do so, it's not anything I've done on a regular basis since playing on the floor with my kids. However, if you're into yoga, which I'm not, I'm guessing it's a goal for you.
You're doing great, Fionna. Keep it up!
@Fiona444
OP
OP

Physio appointment today went really well. She tested my ROM and strength and could find very little difference between operated and non op leg which I was delighted about. She gave me a whole new lot of strength training exercises with those rubber band thingies which actually felt very good to do. They seem to work my muscles without straining them and also include a few muscle groups in each single exercise. As I am all for multitasking and doing as few reps as possible this suits me

. She said that my risk of dislocation was low now although I am always mindful of the chart Josephine has that shows that the risk is there but reduces over a year or so. She watched me go up and down a flight of stairs which she said was totally normal and suggested I incorporate going up the stairs sideways for an additional exercise. Not tried that yet but think I probably will. All in all a good session. She said the next and last session would just be a catch up to see how I was doing as all is OK. Pretty pleased with that.

Ha @Layla Im not so much into yoga although I do it occasionally but crossing my legs was something I never thought I would be able to do, so of course it became a goal

Yay for a good physio appointment, @Fiona444 I am eager to get back to that myself, but have to wait at least a couple more weeks, until I am, I hope, released by my OS who will provide a PT referral I suspect since you were such an avid walker before (and now after) hip replacement that your legs were probably in pretty darn good shape going into surgery and it won't take a whole lot to build up any strength and flexibility so you're back to where you were before this hip nonsense started. I'm walking up and down stairs normally now, but I'd be careful going sideways up or down. I am sure it uses a whole bunch of muscles that haven't had a workout recently, but do hold on to the bannister/railing--no falls allowed! Keep up the good work--you are doing so great!
OP
OP

I must admit I was a bit sore after yesterdays session @Barbaraj. I do think my pre fitness has helped a lot and I would definitely recommend to people who are considering THR to exercise as much as possible pre op. I know you did that too and it must help us.

Today was a rather shocking day. I watched a man putting something in a hedge while out with my dogs. He then drove off. I went to find out what it was and found a tiny little hedgehog (again) that really should not have been out in the day. I had my dog in one hand, a ball launcher in the other and no one to help me. I took my jacket off and wrapped the little thing in it and manhandled the whole crew home. I had to find a cat carrier in the shed, wash it out and dig some old newspapers out to keep the little hog safe until I could think what to do with him. Anyhow, I sorted all that and for some reason found myself kneeling on the floor while I tended him. I absolutely did not even THINK about it, it just happened. I will try and upload a pic of the little hog 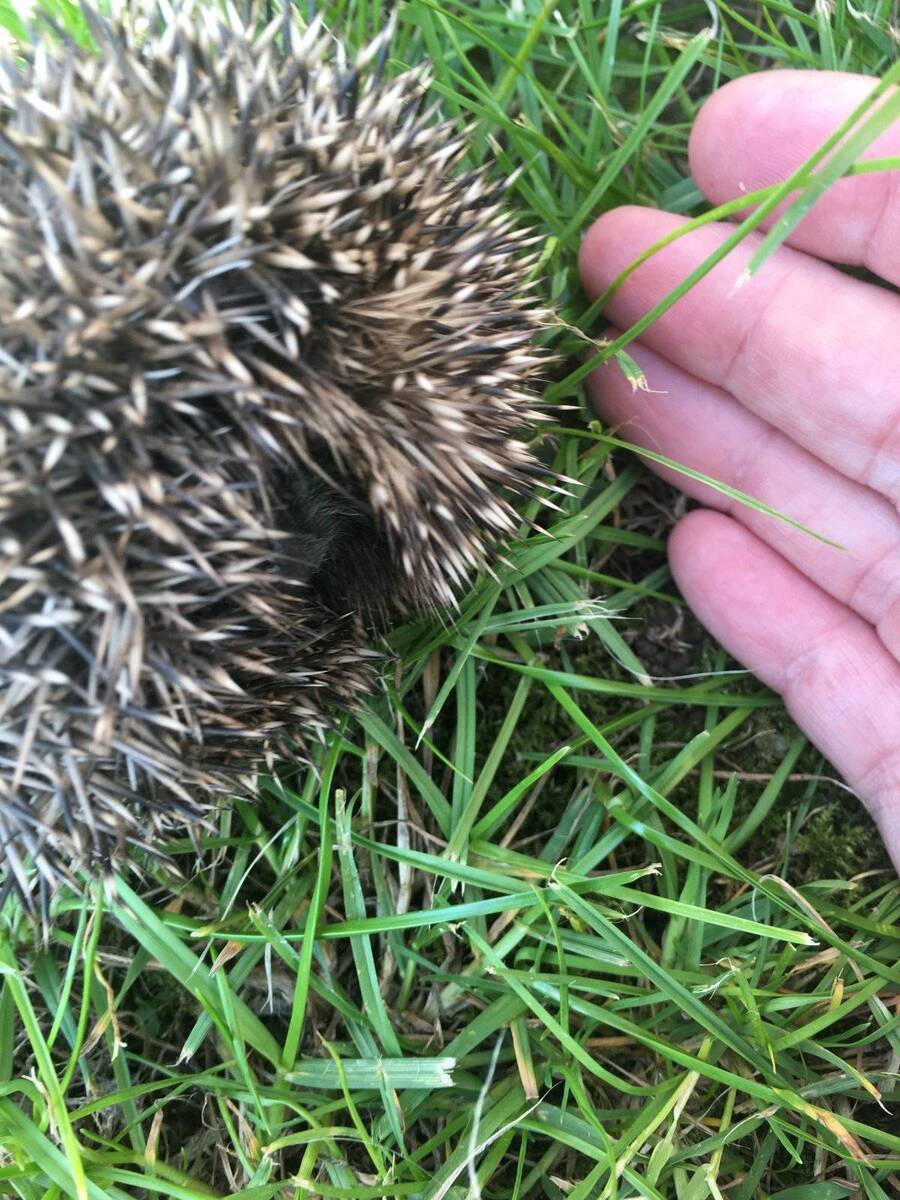 That little creature looks like a porcupine ball. Does it hurt to touch it?
I'm really not familiar with hedgehogs, Fiona. Are they not supposed to be out in daylight, do people have them as pets and curious about why it was discarded into a bush? Are they considered nuisance animals by some?
I guess I could access Wikipedia but you seem pretty knowledgeable, figured I'd pick your brain. I hope you're doing well. Managing dogs on the daily walks tells me you're in a good place.
Have a great evening!
@Fiona444
OP
OP

Hi Layla! Hedgehogs are wildlife but their numbers are declining over the last few years due to many reasons including less green space, garden poisons, road deaths and I am sure many more. People would not usually keep them as pets but I would say there are many who may have been injured, taken in by sanctuaries and not able to be released back into the wild. They are nocturnal so to see them out in the daylight generally means that they are in trouble. This little chap was tiny so probably was not fending for himself very well and was likely hungry and thirsty. I do not think they would be classed as nuisance as they help gardeners by keeping the garden free of bugs and they do not do any damage. He was prickly to touch so care should be taken when handling them. I think in this case, the man who put him under the hedge probably thought he was doing the hog a favour, maybe he found him in the road or something. Little hog is now at a wildlife sanctuary and will be cared for until he can look after himself and be released.

You're a soft hearted gentle soul, Fiona. Thanks for the informative post.
You probably saved the little hedgehogs life.
Take care!
@Fiona444

@Fiona444 Thank you for getting this little hog to a safe place!

Such a lovely story @Fiona444 ! A day very well spent!
You must log in or register to reply here.