Core Decompression of the hip

Actually AVN usually a joint specific condition. Hips are the most vulnerable because the head of the femur has an odd structure and an odd blood supply.

The blood supply is not rich so any problem like arthritis or micro-trauma that causes any degradation of the bone in the head can disrupt the blood flow and so the bone begins to die back. This is also because of how the head is 'out there' on the angled neck which makes the loading extreme. No other joint is like this although a similar thing can occur in the knee because that is also a weight bearing joint. The use of steroids or addiction to hard drugs or alcohol can have the effect of softening the bone which is the prelude to AVN. Post menopausal women (and men!) can also suffer this as a by product of osteoporosis. 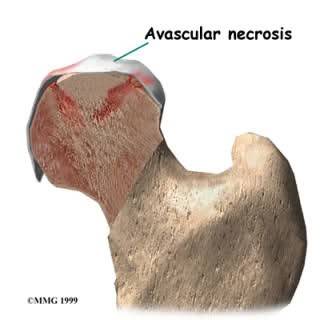 AVN is graded according to the degree of damage of the head and surrounding structures. There are various systems of doing this

Steinberg modification of the Arlet and Ficat system 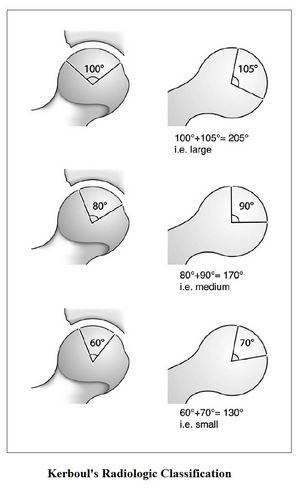 Core decompression is a procedure whereby new bone or implants are implanted along the neck of the femur in an attempt to regenerate the blood supply.

Option 1. Live Vascularized Fibular Graft (LVFG)
The shaft of the fibula which lies alongside the tibia or shin bone, is taken from elsewhere in the body along with blood vessels that can be joined to the blood vessels around the upper end of the femur. It's a bit a like an organ transplant except it comes from your own body. 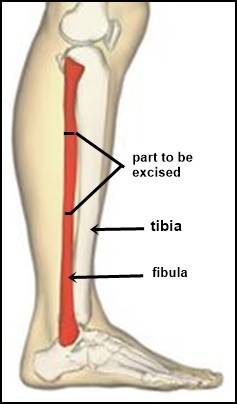 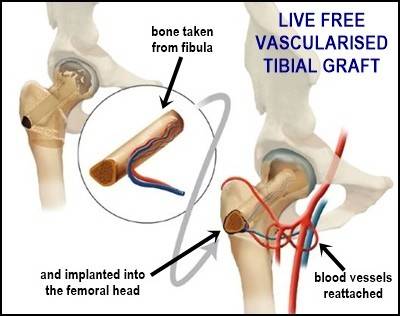 Problems arising from this are
a) the place where the bone is taken from is often more painful than the procedure in the hip
b) the bone graft might not survive or doesn't meld with the bone around it and the arthritic processes continue to progress.

Option 2:
There are implants that can be used instead of the bone graft. Two examples are 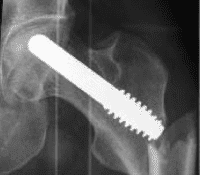 Option 3.
substances can be injected into the cavity (made by the AVN) which will first be cleaned of debris. This can be bone meal from a bone bank or the patient's own bone or synthetic bone 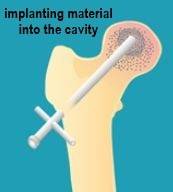 Core decompression is a procedure whereby various grafts or implants are inserted into the neck and head of the femur in an attempt to regenerate bone growth.

Live vascularised fibular graft (LVFG) is to take the mid section of the fibula in the lower leg complete with arterial attachment and a section of and insert it into the femoral head and neck - a painful procedure of its own. This is fashioned into a small bone rod complete with a pair of minor blood vessels and inserted up the neck of the femur.

The blood vessels are then attached to existing vessels in the thigh to ensure the graft has a blood supply. The objective is to bring new life to a femoral head that is suffering from avascular/aseptic (no blood) necrosis (bone death) but isn't always as successful as one would hope.

(One of several analytical studies) Steinberg et al (2001) reviewed the results of a prospective study of 406 hips in 285 patients treated by one surgeon with core decompression and bone grafting. Patients were followed-up for 2 to 14 years.

In patients treated before femoral head collapse, the outcome is significantly better than in patients who received symptomatic treatment.
Last edited by a moderator: Jul 28, 2020

Re: Hip Core Decompression - my experience so far

I had my hip replaced 5 weeks ago due to AVN. My AVN went from Stage 1 to complete collapse in less than a year. The pain you will experience if the joint collapses is a solid ten. Every AVN patient can accurately describe the exact place and time they were when the collapse occurs. I was standing in my home office after having been at my desk for about an hour. As I placed weight on the hip it collapsed. The pain send me literally to my knees.

My OS told me that all of his CD patients eventually needed a THR. He doesn't believe in doing CD's anymore , other than to relieve severe pain in patients who refuse to have a THR.

I would strongly advise anyone considering a CD of the hip to spend a lot of time researching this procedure. My research confirmed my assumptions that this procedure is palliative at best.

At 5 weeks post -op I have zero pain at rest, and no joint pain with weight bearing. I doubt you'll find any CD patients who will be able to claim the same at 5 weeks post-op.
OP
OP

NOTE
The links http://jbjs.org/data/Journals/JBJS/844/JBJA084050834.pdf and http://jbjs.org/article.aspx?articleid=28595 are sadly no longer available.
You must log in or register to reply here.