When people first hear they will need a bone graft, their immediate reaction is often "

Oh my gosh! This sounds serious!" but actually it's not. It's actually quite a common, almost routine addition to the procedure.

Reasons for a bone graft:
1. thin acetabular (socket) floor: usually as a result of dysplasia or it can happen during the development of severe arthritis or have progressed to the stage of acetabular protrusio or Protrusio acetabuli which literally means 'protrusion through the acetabulum' (xray below) 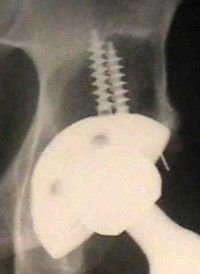 2. bone cyst: these are fairly common and occur as part of the arthritic process or, on more rare occasions, might even develop on their own. Bone cysts can be anything from the size of a grape to the size of a grapefruit but their presence generally indicates a weakening of the bone in that area because the cyst will be filled with fatty material which contribute nothing to the strength of the bone. 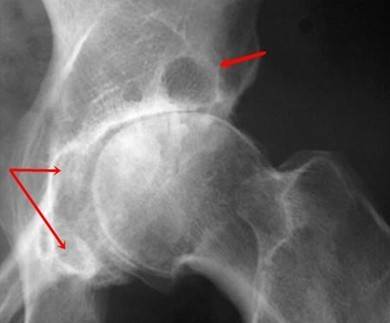 4. fractures, microfractures and other damage: all indicating general deterioration in the bone

The donated bone is deep frozen and stored in sterile conditions. It is also tested for disease and infection such as HebB, HIV, CJD and other pathogens. Once it is cleared, it is made ready for use.

When a surgeon requires one for a patient, it is ordered from the Bone Bank - either a national or local one or, if in a very large hospital with a specialist orthopaedic unit, the hospital's own bank, and delivered to the operating room to be kept in a freezer until it is required.

The bone is then decanted onto the instrument trolley where it is milled into bone meal and used to pack into cavities to encourage the growth of new bone. One femoral head can generate about 400mgs of bone meal which is usually more than enough. 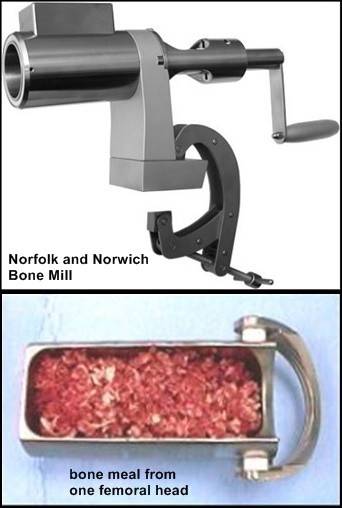 Another resource though less frequently used these days, is to harvest bone from the patient themselves; sites being either the high crest of the pelvis or even more rarely, the tibia or shin bone. The disadvantage of these is that the patient then has a second surgical site to recover from and they are often very painful all on their own!


Sometimes, depending upon the site and size of the cavity, the surgeon might instruct his patient to be non-weight bearing for some weeks to allow the grafted bone to do its job.
You must log in or register to reply here.