Question: a week after surgery...should my leg around the incision still be numb and warm to the touch?

Hi @mmits42
Yes, the soft tissue trauma caused by opening up our leg, teasing muscles and ligaments apart, and the carpentry involved in inserting the hardware is going to take some time to heal.
If the incision looks angry red and increasingly hot ( not warm) or has unusual discharge...you will want to inform your care team.
The area around my incision stayed numb for quite some time... The "patch" of numbness got smaller throughout the course of a year...all normal now.
OP
OP

Thank you Mojo. My experience with surgery has been around shoulders. This is a very different feel to me. I dont get to peel the aquacell bandage off until friday with my NP online. Cant wait. I feel like the new kid in town with only my first hip. lol. The numbness is not something I am familiar with I feel like i can feel the new hardware in there.
i did sign up with OneStep and meet my PT this morning.

Keep the ice going, my friend...
I remember I didn't have alot of visible swelling but things inside felt hard, as if I could feel new prosthesis.
It gets better.

mmits42 said:
The numbness is not something I am familiar with
Click to expand...

Here is some info I found awhile back that explains the numbness -
Small sensory nerve fibers are cut with the incision. These nerve fibers run from the inside to the outside of the hip and cutting them causes the hip to feel numb after surgery. It is a temporary sensation that normally resolves over a period of six months to one year post op.

While healing you may experience sensations of tingling, pins and needles, itching, burning and even the feeling of a minor electrical shock. These are usually good signs that the nerves are spontaneously firing through the regeneration process. This process is not to be confused with the initial post op numbness resulting from anesthesia or a regional block which can produce numbness lasting for up to 72 hrs post op.

My experience was the same as Mojo’s, the area of numbness lasted for months, So as strange as it feels, it’s normal. You’re normal, normal, normal....Yay!

Have a great day!
OP
OP

Thanks folks. Learning experience for me. Yesterday was my first day off the walker and on the cane. By dinner time I was so sore I considered oxy for the first time since day one. Oxy is not a fav for me.

@mmits42 Still very early days for you. Use the walker as long as you need it. It's all about building strength and confidence.

Stay on the walker as long as you body likes the walker. That you were in pain later suggests that you weren't quite ready for the cane.

You're only a week out and note: you can get a ton of good exercise on the walker.
OP
OP

Had an especially quiet Father's day. Basically laid around all day, used the Cryo therapy cube for several long sessions and felt great. My gait was pretty smooth by end of the day. I suspect all the cold helped calm down everything. I took the dogs out last night, off leash on the side of the house and must have stepped hard as now I was very sore all over again. Perhaps part of it was the cold wearing off but Im guessing its the old 2 steps forward one step back.

Wondering if the dogs jerked you around at all? Or if the terrain was uneven? Doesn’t take much to throw us off early on. You’re in such very early days of recovery that ups and downs happen. Continue using ice and any meds prescribed and take it slow and easy.

mmits42 said:
Im guessing its the old 2 steps forward one step back.
Click to expand...

The Reality of Recovery - 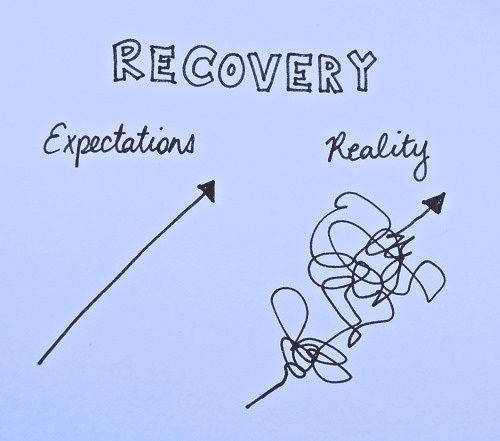 I hope you have a nice week!

mmits42 said:
Question: a week after surgery...should my leg around the incision still be numb and warm to the touch?
Click to expand...

The area around my incision is still swollen and numb. I’m almost 10 weeks out.
OP
OP

Thanks folks, ok, will let this all play out.
And the dogs were offleash in my yard. So, it was probably more my impatience.

Glad to see you're icing, it will make it better. Early weeks it doesn't take much to take those 2 steps backwards. If you get real impatient it can be more than 2 steps and I think we've all done it.
OP
OP

About 3 1/2 weeks out. Still having trouble sleeping more than a couple hours. I feel like I am making progress but just don't feel rested. Mostly on my back, elevated, not elevated, pillow under knee. On left side with leg bent gets me a short rest but can't stay comfortable with that position.

Cannot lie on incision side yet.

Good note. Yoga seems to be a great therapy. Little at a time.

Any tips on sleep are welcome.

The only thing I can offer is sleep whenever you can. I don’t normally nap, but it became a way of life early on in recovery.

mmits42 said:
Any tips on sleep are welcome.
Click to expand...

Extra bed pillows worked for me. I pretty much surrounded myself with them. That way I could rest an arm on one, put a leg over another, whatever felt right. They are soft and comfy in my opinion and just seemed to help me relax more and get the sleep / rest I needed. My favorite was a $10 Body Pillow from Target. Gather up some extra bed pillows from around the house and see if it helps.

Have a safe and happy 4th!
OP
OP

Actually I have pillows all over the bed in case i need them. They end up against my wife and on the floor. The dogs enjoy that.
OP
OP

Sharp shooting pains in hip and quads. out of the blue.I could be laying down doing nothing. Im assuming these are nerve related. Ice dosen't help.

For several months post-op, I had some very "shocking" zips and zaps,

especially as I became more active.

They seemed to come out of nowhere and were what I described as burning at times but also, thankfully, Fleeting.

I attribute it now to Nerves waking up but it sent me to the forum in a panic.
Became less frequent over time.
Ahh.... Time. The ultimate healer, but in the meantime

Hang in there, friend.
T

Hi @mmits42 ! My LTHR was the day before yours I think. I also have random “OW!” Moments through the day. Also have achy pain in the joint itself — do you have that? Saw your note about your dogs. My pup is an Australian shepherd, very active! I found I can whack her favourite soccer ball a fair distance with my cane, so she’s getting some exercise that way!
You must log in or register to reply here.