Welcome to my recovery. Here’s to it going as well as the last one!

And welcome to this side! Hope you are comfortable!

Welcome!
Following you'll find the Recovery Guidelines to peruse while you're still clear headed, bright eyed and bushy tailed. Wishing you comfort as you await your big day tomorrow. We'll look forward to hearing from you once you're resting comfortably and feeling up to posting.
All the best to you!


Hip Recovery: The Guidelines
1. Don’t worry: Your body will heal all by itself. Relax, let it, don't try and hurry it, don’t worry about any symptoms now, they are almost certainly temporary
2. Control discomfort:

rest
elevate
ice
take your pain meds by prescription schedule (not when pain starts!)​
3. Do what you want to do BUT
a. If it hurts, don't do it and don't allow anyone - especially a physical therapist - to do it to you
b. If your leg swells more or gets stiffer in the 24 hours after doing it, don't do it again.
4. PT or exercise can be useful BUT take note of these

Post op blues is a reality - be prepared for it
Myth busting: on getting addicted to pain meds
Sleep deprivation is pretty much inevitable - but what causes it?

BIG TIP: Hips actually don't need any exercise to get better. They do a pretty good job of it all on their own if given half a chance. Trouble is, people don't give them a chance and end up with all sorts of aches and pains and sore spots. All they need is the best therapy which is walking and even then not to excess.

While members may create as many threads as they like in a majority of BoneSmart's forums, we ask the at each member have only one recovery thread. This policy makes it easier to go back and review history before providing advice. @inthebeginning
Last edited: May 19, 2019

Wishing you well tomorrow and hopefully an amazing recovery!

T-minus 2 hours to check in!
See you on the other side!

Best of luck to you!
We'll look forward to your first post once you're feeling up to it.
@inthebeginning

See you soon on this healing thread...
All the best

It’s 2330 hours. Start was delayed this afternoon. I’m not really even sure what time I was wheeled back. Thinking the first cut was around 1430 or so. We did a spinal this time which I thought we did 6 years ago but the anesthesiologist was the same from that first time and he confirmed it was general.

The procedure took about 2 hours, so I ended up going under general anyway about halfway through. Recovery floor was good. Some applesauce and ice chips! Made it up to a room and ordered a burger with fries and iced tea. Was so very sleepy so only had a couple of bites and slept. Wifey and daughter were in recovery for a bit. Wife picked up son from
Basketball practice and they stayed until about 2115, after all it is a school day tomorrow!

The procedure went well according to the doc. The old stem pretty much came out in his hand . I now have a longer, wider and slightly beefier stem embedded down farther into some fresh bone. He said he reshaped the cavity to get this one to fit better. While he was in there I received a new cup as well! So the clock was reset to Zero on the total package.

I have taken a spin around the floor already with a walker! The knee actually hurts more than the hip! He said he really had to pound the new stem in.

Right before I started this post, I have been released from the catheter, O2 and IV!! Yay me!

That’s all for now.

Glad to see your post. Hope your pain is well managed and that soon you will be on your way home.
Healing vibes coming your way.

Glad THAT bit is over with and you can get going with hip Mark II.

Mojo333 said:
Glad to see your post. Hope your pain is well managed and that soon you will be on your way home.
Healing vibes coming your way.

I’ve had more sleep in the hospital recliner than I’ve had at home in weeks! Percocet and Tylenol are working quite well!
OP
OP

Hoppy Nanny said:
Glad THAT bit is over with and you can get going with hip Mark II.


Sent from my iPhone using Tapatalk
Click to expand...

Boy, am I! May not pile on the miles as quickly as last time as I am 50% weight bearing for the first two weeks, but will enjoy every step!

I was so horribly sleep deprived by the time I got my surgeries...I was grateful they were going to knock me out.

Summer will be truly sweet!

Happy to hear your surgery is over and you are on your way to a great recovery! That is quite the dinner you woke up wanting
OP
OP

I was so horribly sleep deprived by the time I got my surgeries...I was grateful they were going to knock me out.

With the exception of some weekend nights, I average between 4-6 hours normally. I’m probably at at least 6 already tonight. It’s currently 0430!
OP
OP

Just took a second lap around the floor with my walker and whichever nurse would have me! She also brought my first cup of coffee [emoji477]️ 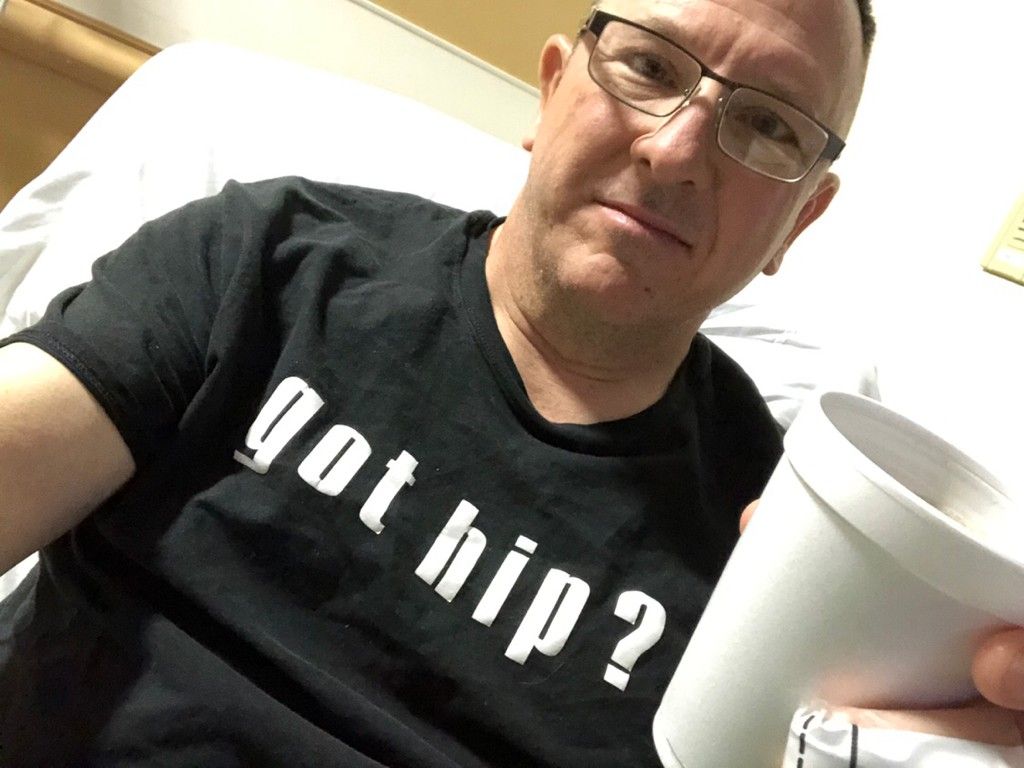 Sent from my iPhone using Tapatalk

Nothing like a coffee and a cool t-shirt to start your 1st day!

Wow... steady on .. you will be overtaking us all.[emoji23][emoji23]
Good T shirt! So pleased for you
sleep, walk & coffee.. the Holy
Trinity of hip recovery!

Great attitude, fueled by a cup of joe! Looks like you’re doing great!
You must log in or register to reply here.